BIGtheme.net http://bigtheme.net/ecommerce/opencart OpenCart Templates
Home » Anti-Imperialist Front » Symposiums » 1.Symposium of the peoples union against the imperialist aggression » We call all the peoples of the world…

We call all the peoples of the world…

WE CALL ALL THE PEOPLES OF THE WORLD

TO ENGAGE IN A COMMON STRUGGLE AGAINST IMPERIALISM

The People’s Front has a history of 30 years in which it has contributed to developing the democratic struggle in Turkey. Aware of who is responsible for the violence of imperialism and the oligarchy, it does not confine its struggle to legality but conducts it on the basis of legitimacy.

The People’s Front has the mission and the dignity of representing the anti-imperialist and anti-oligarchic struggle for revolution in our country, which began in the 1970s under the leadership of  Mahir Cayan, and extends into the present day.

It succeeded in taking on the mission of the political prisoners opposing the surrender policy in the prisons of imperialism and the oligarchy, though at the price of martyrs in the Death Fast of 1984. It turned the prisons, which were meant to be a means of intimidating revolutionary prisoners, into a school of revolution. It created a history of prisoners not allowing themselves to be broken. In its years of resistance in the prisons, the People’s Front has created a tradition with a line that multiplies heroism and anchors resistance in the masses.

The People’s Front stood on the side of peoples suffering under the attacks of imperialism and Zionism, and saw this as an attack on its own peoples. It reacted to the enemies of the people on its own front with legal and legitimate actions. It showed solidarity with the Palestinian people against the attacks of Zionist Israel and exposed the oligarchy of Turkey’s collaboration with Israel, both open and concealed. It belongs to a history which gave due punishment to the Zionist Israeli consul in our country, Ephraim Elrom.

It is defender of the tradition that burned the car of the US ambassador Komer.

The People’s Front draws strength from the history in which members of the Sixth Fleet, part of imperialism which is the enemy of the peoples, were hurled into the sea.

And in 2003, human shields went to Iraq as a reaction to US aggression against Iraq, to show solidarity with the peoples of the Middle East. Two of our friends were among them.

It organised opposition in our country through various campaigns and activities and played a key role in the founding of the “No to War on Iraq Coordination”. Numerous joint actions were carried out through this alliance.

At gatherings in many countries of the world, among others in Lebanon, Jordan, Kenya, Egypt, Austria, Germany, Greece, Italy and Brazil, it has reported on the history of struggle of the People’s Front and found the opportunity to share its experiences of struggle against imperialism with friendly countries and revolutionaries.

In 2008, in anti-imperialist awareness and with the view that the chief enemy of the oppressed peoples is the USA, it organised the campaign “The Common Enemy is America”. With this campaign, consciousness was developed among our peoples, both in numerous cities of our country, as well as abroad.

She participated in and also took a lead role within the “alliance against the IMF and the World Bank”, which declared that the IMF and the World Bank are institutions which are used by imperialism to exploit the oppressed peoples, and this would not be tolerated in our country. And in 2009, it announced that they would be received in our country as enemies, as they deserved.
The People’s Front has been a target of the oligarchy in Turkey because of its anti-imperialist struggle and has had 600 martyrs and many hundreds of people left injured in the struggle as a result. Yet because of its resolve it has lost nothing, despite all these sacrifices.

The People’s Front, whose history we have briefly sought to describe, would like to profit from the experiences of the peoples of other lands and their organisations in struggle against imperialism and in relation to the anti-imperialist struggle it seeks to create international unity.

We are convinced that the exchange of these experiences and unity arising from it represents a significant force against imperialism.

In this sense we would be very pleased if you could share with us your experiences in the struggle against imperialism by giving us the opportunity to meet you at the Symposium organised by the People’s Front entitled “Unity of the peoples against imperialist aggression”.

The programme of the Symposium follows.

SYMPOSIUM FOR THE UNITY OF THE PEOPLE AGAINST IMPERIALISM

The symposium will take place from December 4-6, 2009 in Istanbul.

2:30-4:00 p.m.: Lunch break
4:00-6:00 p.m.: 3rd session
– The Palestinian resistance and internationalism
– How to conquer internal problems in Palestine
– How to establish the unity of resistance organisations.

12:30-2:30 p.m.: 2nd session
– Discussion on the worldwide class- and national struggles against imperialism

We’re looking forward to your participation in the symposium and request to inform us, in which session you would like to speak.
Respectfully 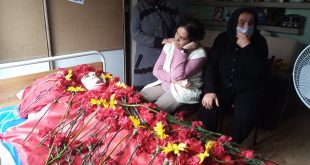 Sleep, red sister of the revolution. Don’t be upset just because our eyes are a ...