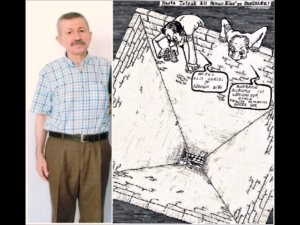 I am writing to you from a place similar to the place where you are being held, where you walk into the future with the freedom of your dreams, despite the four walls.

There was a news in the papers today. Olive trees are being cut down in a village in green Bursa, hometown of olives, due to a thermal power plant. Those silvery trees that grow patiently, are content with what nature offers rather than human labor, are modest, whose branches are remembered with peace because of their nutritional value and productivity, and whose leaves cling to each other like brothers. They chop down centuries-old trees for profit.

Moreover, by cutting trees, they destroy the livelihoods of the people and destroy nature. You came to my mind when I read the news about olive trees.

You are from Bursa too, I saw your village, the village of Karaağaç, rich with olive trees. Your resemblance to olive trees came to life in my eyes. A century-old life is in front of you, humble like them, resistant to difficult conditions, accepting difficulties as a normal part of life, not choosing a place for itself, not coming to the fore, always producing, always enthusiastic.

A heart full of love that prides itself on being the rank of the people.

While your brain and heart ignore difficulties, your body reminds you of its own difficulties. You have struggled with many diseases, you have ignored them. But the disease called cancer has passed the point of ignoring. We see that there are people who want to destroy your life by ignoring your right to be treated. They targeted your life as if they wanted to held you accountable for resisting the massacre, isolation and attacks in the prison.

How much of a carnage it is for the nature and the people who are a part of that land, to damage the olive trees; An attack on a valuable client like you, who devoted his life to his people and spent his life resisting, is also a massacre.

You should know that we are with you and we are part of the struggle.

We will not let you be murdered in prison!