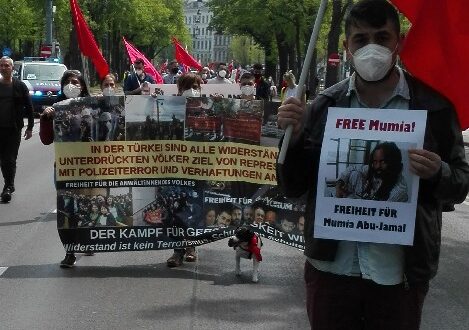 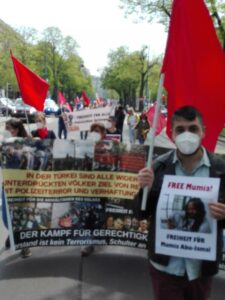 At the 1st Congress of the 2nd International in July 1889, May Day was declared “The Day of Unity, Solidarity and Struggle of the Working People of the World.”
These values should also be represented on May 1, 2021. In addition to the struggle for better working conditions and the maintenance of social achievements and other important social issues, the struggle of political prisoners should also be mentioned.
This is why in Austria the Freedom Committee Ali Osman Köse also took part in the Annual Internationalist Mayday Demonstration along with many other revolutionary, antifascist groups to demand Freedom for the ill prisoner Ali Osman Köse and all Political Prisoners.
Besides a picture of Ali Osman Köse there was also a poster demanding Freedom for Mumia Abu Jamal and the People’s Lawyer Aytac Ünsal. A banner in German an English saying “Free All Political Prisoners” as well as a big banner in support of the imprisoned Yüksel resisters, people’s lawyers and members of Grup Yorum were carried in between dozens of red flags.
At the beginning of the rally in front of Vienna’s Opera house, the different participating organisations held their speeches. The Freedom Committee for Ali Osman Köse also spoke about the historical importance of this Day of Struggle of the oppressed people, condemning the ongoing imperialist war policy and social robbery in the midst of the Covid-19 pandemy and called for solidarity with all political prisoners from Turkey to the USA and Latin America, who are part of the struggle for justice and freedom.
There was made an urgent call for support of the ill prisoner Ali Osman Köse in Turkey and around 300 leaflets were distributed during the demonstration and at several meeting points.
Long Live International Solidarity!

(English translation of the German flyer):
May Day: Day of Unity, Solidarity and Struggle

May Day has been a day of struggle for working people and laborers for 135 years.
On May 1, 1886, a general strike was held in Chicago for the enforcement of the 8-hour day. The rulers wanted to nip all demands in the bud. 6 workers were charged as leaders of the strike and sentenced to death, 4 of them hanged.
At the 1st Congress of the 2nd International in July 1889, May Day was declared “The day of Unity, Solidarity and Struggle of the Working People of the World.”
These values should also be represented on May 1, 2021. In addition to the struggle for better working conditions and the maintenance of social achievements and other important social issues, the struggle of political prisoners should also be mentioned.
Because in the consciousness that rights and freedoms are not a gift but they have to be gained in struggle, they fought for a world of equality and solidarity, against exploitation, oppression, hunger and injustice. And in doing so they have forfeited their freedom.
The rulers regard political prisoners as their class enemy.  Therefore, it is not enough for them to lock them up for years. The prison conditions are made so inhumane that the prisoners perish physically. Long prison sentences, long prison terms and the prison conditions, above all isolation torture, lead to serious illnesses.
Mumia Abu Jamal has been imprisoned in the U.S. for 40 years and has just recently undergone open heart surgery.
George İbrahim Abdallah has been imprisoned in France for 37 years and his release, which should have taken place long ago, is arbitrarily delayed again and again.
There are thousands of political prisoners in Turkey, and many are now seriously mentally and physically ill due to the cruel prison policy and solitary confinement.
Ali Osman Köse is one of them. He has been imprisoned for 37 years, 21 years of which he has already spent in F-type prisons in solitary confinement, and in addition to the many other physical and psychological burdens, he is now also suffering from kidney cancer.
LET US STAND UP FOR THE RIGHT TO LIFE OF POLITICAL PRISONERS AND ALI OSMAN KÖSE
Prolonged imprisonment, torture he suffered throughout his imprisonment and isolation practices for the last 21 years resulted in neurological problems, digestive system diseases, hypertension, hearing loss, balance disorders, stomach problems, vision problems and many other health problems.
His health condition has visibly deteriorated in the last 8 months. Due to deliberately disregarded sanitary precautions, he was also infected with Covid-19.
However, the biggest health problem now is his cancer.
He is suffering from kidney cancer.  On March 31, a 9 cm tumor was found on his left kidney at Trakya University Hospital. The doctors have certified that the tumor is life-threatening and must be removed urgently.
However, the same doctors who want him to be operated on as soon as possible are using the pandemic as a pretext and postponing the operation. The whole thing then becomes even more complicated, because 2 hospitals have to arrange appointments with each other.
1 The Trakya University Hospital, which is bound to the Namik Kemal Tekirdag University Hospital, for the operation.
2 The Namik Kemal- Tekirdag University Hospital, which is to provide medical care after the operation.
No appointment is given. There is a policy of bureaucracy and stalling. The doctors do not give an exact date and just say that it would not be possible before May. Although so much time has passed, under the pretext of the Covid-19 pandemic and overcrowded beds, the operation is not performed and his treatment is prevented.
To live is a right.  To let live is a duty!
The sick prisoner Ali Osman Köse should be released from prison immediately and his therapy should be started.
Solidarity is the weapon of the peoples, let’s use it! 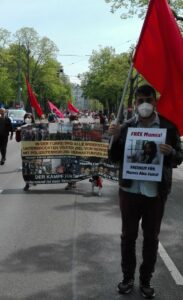