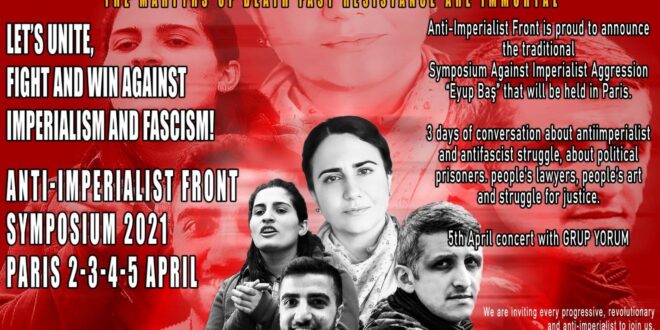 INTERNATIONAL SYMPOSIUM FOR JUSTICE – DAY 3: CHANGING THE WORLD WITH REVOLUTIONARY ART OF THE PEOPLE

The program of the 3rd Day was very remarkable for the speakers and the contents. It was dedicated to the martyrs Helin and Ibrahim, both members of Grup Yorum. Grup Yorum is a collective fighting to change the world with art. “How can you change the world with art?” was the theme of the first session discussed together with many speakers.
The opening speech was made by Bergün Varan, a member of Grup Yorum in Turkey. As other members of the group she had to face a lot of repression.
The group members have to fight even for being able to perform their music. Bergün introduced the mother of Helin Bolek, Aygül Bilgi and Ibrahim Gökçek’s father Ahmet Gökçek who have been always at the side of their children carrying on the fight for justice and supporting their revolutionary choice to raise the individual to a higher level building a more fair society through music.
Among others Banda Bassotti, a music group from Italy which also shares the struggle for justice and has close ties with Grup Yorum, made a statement: The Italian music band is aware of the important role of art and artists in today’s world, as well as of the responsibility to share international solidarity between artists.

Some examples of international solidarity were also presented by the Comitato Solidale Grup Yorum, a solidarity committee formed in Italy during the death fast period last year and is nowadays still very active in terms of breaking the silence about ongoing repression and resistance in Turkey.
Among the speakers there was also the lawyer of Grup Yorum in Germany: Yener Sözen talked about his experience as a defender of a music group, in a country that claims to be democratic in the heart of Europe, but which, under the excuse of anti-terrororism law persecutes dissident voices and those denouncing the system -especially driven by its close political and economic ties with Turkey.

In the end, theater artist Mehmet Esatoglu from Turkey took the floor. He has been always at the side of Grup Yorum to defend art for the people and artists who have been under repression especially during this difficult period.

The 1st session was concluded with a solidarity video message and song of YPERASTIKOI, a Greek music band with close relationship to Grup Yorum.

The Topic of the 2nd session of Day 3 was “From Victor Jara to Grup Yorum – From Grup Yorum to Pablo Hasel”
This session was joined by international artists who carried out solidarity actions and performed songs in support of Grup Yorum during the Death Fast Resistance.
German deputy of the party DIE LINKE, artist Diether Dehm, Chilenean musician Nicolás Miquea, who is based in Germany and shows solidarity with Grup Yorum for many years, talked about the importance of revolutionary political art and the international solidarity. The political German band Gehoerwaesche, which also expressed solidarity for Grup Yorum several times, sent a video speech.
Among the many artists from Greece who showed great support during resistance, Rozi Monaki, actor of Militan Actors and Savvas Stroumpos, who is theater director of Shmeio Mhden (Ground Cero) theater group, joined the symposium.
Both of them are work as artists within the solidarity movement and they are part of the Greek Committee in Solidarity with Grup Yorum, just as Argyris Nikolaou and Aggelos. The last two have sent a video with speeches and solidarity songs, including actions carried out by this committee in order to extend the voice of the Death Fast.
Alejandra Matamoros from Spain, who is the lawyer of the imprisoned revolutionary musician Pablo Hasel, also spoke in this session about the right of artists to perform political art and the importance of international solidarity. She submitted the greetings of Pablo with his personal message of solidarity from prison.
The session was finished with a video of the Grup Yorum Solidarity Comittee in Austria, which included a short message for the symposium and 2 songs of solidarity.
The Day for the Freedom of Revolutionary Art, which was the last day of the Symposium for Justice was closed with The International.

We would like to thank you from the bottom of our hearts. Thanks to all participants, viewers, interpreters, and to all comrades who work so hard and collectiv to achieve this goal to make our online Symposium for Justice successful.

The aim of the last symposium was to expand internationalism, to intensify the anti-imperialist and anti-fascist struggle, and to strengthen resistance to class inequality and injustice.
And we believe that this goal has been achieved