BIGtheme.net http://bigtheme.net/ecommerce/opencart OpenCart Templates
Home » Anti-Imperialist Front » INTERVIEW published in Yeni Demokrasi Gazetesi (YD): Pelin Akbaş Yeşil, who was expelled at the Eğitim-Sen General Assembly: “We were expelled when we should have been supported!” 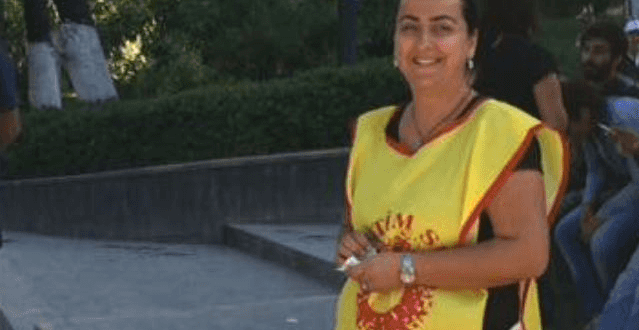 INTERVIEW published in Yeni Demokrasi Gazetesi (YD): Pelin Akbaş Yeşil, who was expelled at the Eğitim-Sen General Assembly: “We were expelled when we should have been supported!”

Pelin Akbaş Yeşil, who was expelled at the Eğitim-Sen General Assembly:
“We were expelled when we should have been supported!”
We talked about this process with Pelin Akbaş Yeşil, who was dismissed by emergency decrees (KHK) and was reinstated after the resistance, suspended from her membership when she was the leader of Hatay Eğitim-Sen and then dismissed from Eğitim-Sen.
“YÜKSEL RESISTERS ARE ARRESTED, I AM IN HOUSE ARREST”
Yeşil, who stated that he was expelled at the 11th Egitim-Sen General Assembly while under house arrest, and that she was a 12-year pre-school teacher, said: “I spent 6 years of my 11-year teaching process by assuming the position of female secretary in the executive board of Hatay Eğitim-Sen Branch.
I was detained on October 28 and taken to Istanbul. After 5 days of detention, I was sentenced to an unfounded and unlawful charge and to house arrest as a result of conspiracy. (In a digital material found there was an acronym in the form of PLN, the person referred to as PLN was a member of the organization, and it was claimed that this was me!)
I was suspended from my profession shortly after house arrest. I have a 3-year-old daughter and she is punished with me in this process. Now I can’t even take her to the park. I wanted to express this situation. While Yüksel resisters are arrested and I’m under house arrest, we were expelled from the union, instead of being supported! Fascism has been given a message: ‘We don’t persons you imprisoned in the union either!’
“THE UNION MANAGERS PREFERRED NOT TO CARRY OUT ACTIONS”
Yeşil stated that they returned to work with the ongoing resistance process after being dismissed with the emergency decrees and continued:
“When the state of emergency was declared and the decrees were issued in 2016, I was a member of the Hatay Branch executive committee and we were suspended here with 928 people. At that time, Eğitim-Sen Hatay Branch exhibited a constant example of resistance. As a result of the uninterrupted struggle, all those suspended were returned to duty. Such an unprecedented resistance wasn’t seen in any other branch in Turkey, so all eyes were directed on our resistance. That process was the days when many public workers were in despair and nobody dared to go out. While our resistance was continuing, the Yüksel Resistance started by Nuriye Gülmen on 9th November. Later, resistance started in different provinces. All of those who participated in the resistance were union members, but the union leaders preferred not to take action, saying that we cannot go on the field in such a process, wait, you will return.
The president of KESK at the time said the unlawful dismissal of thousands of public workers, in the face of such a massive attack on public workers, was a road accident for the emergency laws.
It was a program of struggle that the suspended and dismissed members requested from their unions, the program was prepared on paper but could not be implemented. Just as there was no constant, determined struggle, the break from the founding principles of the union from the de facto legitimate struggle became evident. The difference of opinion between Hatay branch managers and headquarters managers was before, and in this process, the differences of opinion became more evident in terms of our resistance and support of the resistances. We supported the Yüksel Resistance and the actions of the members in some provinces. We published a statement after the Yüksel protesters were beaten out of the KESK building and we condemned this violence and stated that it was unacceptable. Afterwards, those who were subjected to violence and we who supported them went through a disciplinary investigation.
While violence against women is reason for dismissal from the union, nothing was done about the perpetrators of the attack. In the disciplinary investigation, they asked us for a defense saying ‘when your social media accounts were examined, it was claimed you discredited the union.’ Is social media account head office managers’ job?
Is it the job of the central disciplinary board? Or “from whom” did they take our social media posts? The disciplinary investigation that started with these accusations was concluded 9 months later in September 2019, just at the beginning of the congress process. This time, our membership was suspended after our expulsion was requested by slandering us and accusing us of physical attack, which we did not know when and whom we applied.
As members of the executive board, we were all charged with the same unjust accusation, and we were dismissed because our membership was suspended.
Instead of the executive board chosen by the will of the members, people determined by the headquarters were appointed. In other words, a trustee was appointed. This practice is no different, just as AKP delegates trustees to municipalities that do not think like itself and are chosen by the will of the people.
We brought this unlawfulness to the labor court. There are ongoing and concluded lawsuits regarding slander and our unjust dismissal. In a file that went to the last Appeal, Egitim-Sen headquarters was found wrong.
Just before the congress, we were dismissed and our right to vote was usurped. I think they used such a method to prevent us from being elected to the executive board again.”
“THE ARRESTED RESISTER’S AND MY RIGHT TO DEFENSE WAS HINDERED”
Pelin Akbaş Yeşil stated that they were dismissed before they could even use their defense rights in the general assembly and said, “The essence of the matter: The union understandings dominating the headquarters wanted to eliminate us from the union for we did not think like them, and finally we were expelled from union membership at the 11th Eğitim-Sen general assembly held on 28-29 November. They wanted nobody to criticize them! Nobody should voice this historical mistake they made! 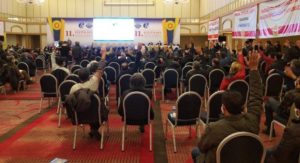 This decision is a black stain on the history of Eğitim-Sen. It is the liquidation of a union understanding. This situation did not occur in two days. Eğitim-Sen did not resist these days, hosted the chief auditor of the AKP in the union, shook hands with the politicians who had blood-smeared hands and came together standing side by side. Therefore, it became hostile to its resisting members. This hostile attitude and purge against the resisters and the public workers who support them is a declaration of surrender for Eğitim-Sen. The arrested resisters and me under house arrest did not even have the right to defend at the assembly. Those who prepared the groundwork for this liquidation and everyone who raised their hands in the voting served fascism. This shame is theirs. We will continue to fight for our work and our bread under all circumstances.”