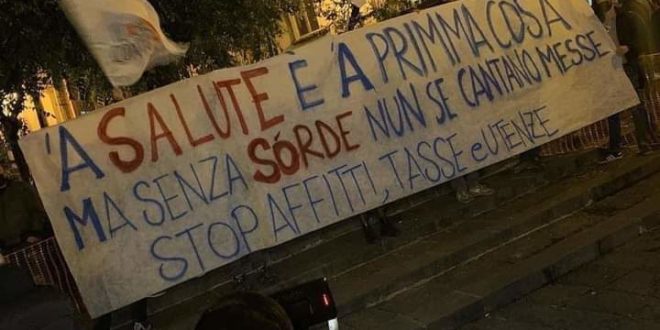 On October 23, at 11pm, hundreds of people took to the streets in Naples to protest against the lockdown of all activities imposed by the Region, following the announcement of the total lockdown in the region by Governor Vincenzo De Luca.
Clashes, protests, tensions. Naples is a powder keg on the first night of the curfew. There were clashes between the police and demonstrators. Police tried to break up the crowd that managed to arrive in front of the Region’s building.
At the top of the demonstration the banner that contains the essence of this protest: “you close us and you pay us”, addressed to the Governor of the Campania Region, Vincenzo De Luca. The decision, then withdrawn as a result of the protest, did not take into account at all that no one was guaranteed anything and that it would have aroused negative feelings in a city where there is a strong presence of “informal economy”, which cannot be reduced to pure criminality, but which is pure survival: illegal work to which we are forced.

In fact, a new lockdown is unthinkable for the Italian people, not because it is not necessary, but because the State (and the Region) does not provide a proactive plan of general recovery: from Public Health (today heavily suborganic, paradoxically in the face of lists of Health Care Workers and Doctors ready to enter into service, but not hired), to the total absence of guarantees for the workplace, from the lack of protection for self-employed workers forced to close their activities of livelihood, to the total disintegration of the school system in presence and safety.
Nothing has been done in these months of “ceasefire” of the disease: not a single doctor or health care worker hired, no systems of guarantees for the people. The State continues to ask for sacrifices and does not grant anything except loans (!).

Social anger grows and begins to explode across the entire population. The masses demand social guarantees. The banks are getting tighter and tighter and violence is growing.
This uprising was immediately framed by the mass media as fascist and camorrista, but the reality is that the social actors of what happened in Naples are the large popular masses who, in one way or another, spontaneously oppose their Resistance. A popular mass that is intensifying its action to respond to the economic and social catastrophe that looms over their/our destiny.

So, what political direction are the general malaise of the people taking during this Covid emergency affecting the whole world?

According to the testimony of a comrade of P. CARC of Naples:
“The line of development that it will take, the direction that it will take will depend on when and how much the workers’ and people’s organizations will consciously act as real new public authorities that are in charge of the production of goods and services that the authorities of the ruling class cut, deconstruct, let them go to hell, sell them off to private profit speculators. Since when and how much they will organize, therefore, growing parts of the collective social life that the bourgeoisie can no longer direct and manage except as matters of public order and repression”.

Whether the protest takes the not convulsely destructive turn, but the construction of a political alternative to the bourgeoisie system will depend on us.

Covid is a historically contingent event that pushes forward the general crisis of capitalism, which can no longer be limited to a single area, but which overwhelms above all the Italian national health system, disfigured by a decade of cuts by the pro-imperialist bourgeois left, and the workers who have no state guarantee.

The resulting distorted reading of these facts that are happening in Italy probably stems from the illusion that in history similar cases of revolt have all been pure, that only conscious and revolutionary masses within a socialist system of thought have been involved in revolutions. The situation is not simple, it should not be exalted, but it should be contextualized and understood because at the moment the orders come from the bourgeois elite who have no problem in reaching the end of the month, while those who suffer it are certainly the people.
Lenin himself, in the face of the imminent catastrophe of his time, said that socialism today looks at us “from all the windows” of capitalism itself:
“Our socialist-revolutionaries and our Mensheviks face the problem of socialism in a doctrinaire way. They face it from the point of view of the doctrine that they have learned by heart and misunderstood. They present socialism as a distant, unknown, dark future. But socialism today looks at us from all the windows of modern capitalism, and socialism is outlined directly and practically in every important measure that constitutes a step forward on the basis of this same modern capitalism.»
THE IMMINENT CATASTROPE AND HOW TO FIGHT AGAINST IT, Vladimir Lenin (September 1917)

Let us be on our guard, then, because socialism may not be so far away and blurred.