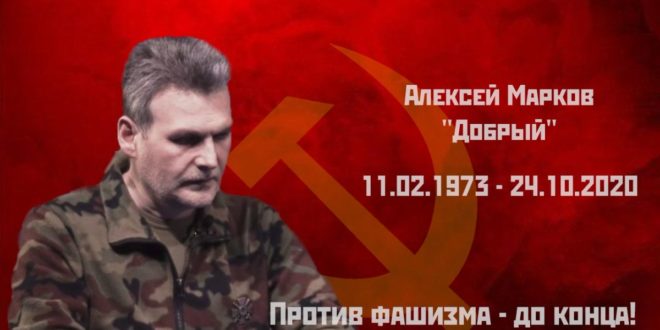 “With great sorrow and regret, I must report that on October 24, one of the commanders of the LPR People’s Militia, Major Colonel Aleksej Markov, died as a result of an accident.
The official representative of the LPR People’s Militia Yakov Osadchiy announced the untimely death of Commander Aleksej Markov, the “good ghost” of the Donbass.
Marxist, nuclear physicist and former computer programmer, Aleksej Markov known as “Dobri” (Russian: “The Good”) was the commander of the Prizrak battalion (Russian: “Ghost”), one of the most important formations among the ranks of comrades who have been fighting against the Ukrainian fascist army for over six years.
Markov has always been at the forefront of the defense of the Republic, so he was and remains an example of courage and heroism for all of us comrades.
On behalf of the Anti-Imperialist Front we express our deepest condolences, sympathy and support to the family and friends of the hero of the People’s Republic of Lugansk.
Eternal memory!
Long live the Resistance!