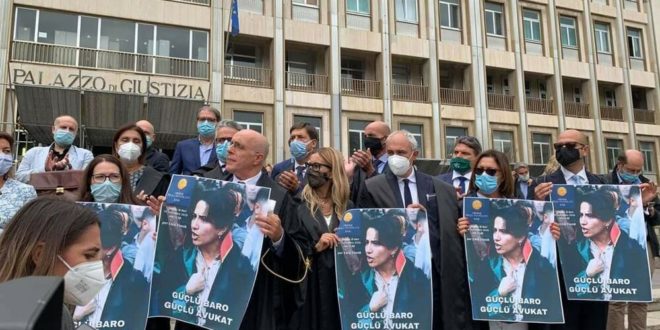 THE ITALIAN LAWYER IN MEMORY OF EBRU TIMTIK

Italian jurists have decided not to turn off the spotlight on the death of the rule of law in Turkey, which could coincide with the death of the Turkish lawyer Ebru Tmtik, following a death fast. Together with her colleague Aytaç Unsal, Ebru carried out this type of protest to the extreme to demand a fair trial for herself and her clients, a jurisdiction independent from the political system and to be able to freely exercise her profession as a lawyer.
Ebru Timtik was arrested in 2018, along with eighteen other lawyers active in the defence of politically vulnerable cases, who saw the Turkish state on trial. In March 2019 she was sentenced, together with the other lawyers, to a total of 159 years imprisonment on charges of being part of a terrorist group, having defended people accused of this crime.

On 28 September, on the occasion of the first month of her death, before the Courts of many Italian squares (including those in Bologna, Bari, Florence, Pistoia, Arezzo, Padova, Prato, Torre Annunziata, Lucca, Bergamo and Ferrara), the lawyers met in toga together with the citizens to demonstrate in a sober and polite manner. Moments of silence followed the strong messages launched in honour of her sacrifice. The image of Ebru, now a symbol throughout the world of justice denied in Turkey, stood out everywhere.
The intention is to reaffirm the constitutional value of everyone’s right to defence and a fair trial inspired solely by the principle of legality and the presumption of innocence.
The President of the Bar Association, Giovanni Stefanì, underlined the will of the lawyers of Bari to “honour the memory of a colleague who sacrificed her life for justice and the protection of people’s rights. An appointment to underline once again the fundamental right to defence of every citizen. A moment also to remember all the lawyers who fight for this all over the world”.