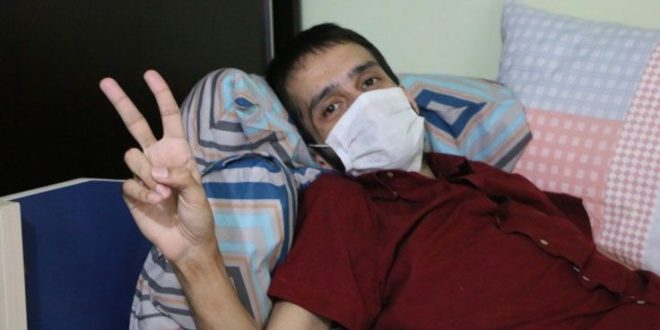 The People’s Lawyer Aytaç Ünşal stopped the hunger strike to death today, as yesterday, on September 3, 2020, he was released from prison, being on the 214 days of hunger strike death fast. His release is a victory for the Resistance, the martyrs and the great solidarity,
developed in all parts of the earth.

During the 238 days of the hunger strike death fast our comrade, a member of the People’s Law Office, Ebru Timtik, fell as a martyr. He was assassinated by imperialism and fascism because he resisted the injustice, exploitation and oppression imposed by Erdogan and his AKP party
to the fighters and peoples of Turkey. He fought  for the right to a fair trial, which is the main demand of the great Resistance of the hunger strike until death.

A fighter for justice, always on the side of the poor, the working class, the people and the youth.
That is why he was imprisoned and killed by the fascist regime of the AKP, because he never stopped, not even for a moment, defending either the lawyer or the militant the oppressed peoples of Turkey. Because together with the rest of the hunger strikers death fasters, she put her body against the repression, the injustice, the silence,
without hesitation in the face of torture, assault and imprisonment.

AYTAÇ ÜNSAL IS OUR HONOUR

SOLIDARITY IS OUR WEAPON