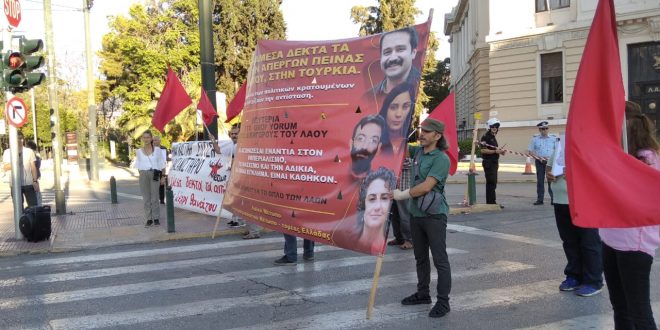 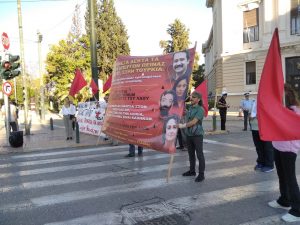 Greece People’s Front make a announcement in front of the Turkish embassy in Athens on Friday the 21st August at 7pm.
They demanded the immediate release and the end of the threats towards the people’s lawyers Aytaç Ünsal and Ebru Timtik who have been forcefully brought to a hospital during their hunger strike.
Every damage the people’s lawyers have to suffer is the responsibility of the AKP and they have to give a justification to the people. The statement, read in Greek, listed the demands and provided information about the death fast process. Grup Yorum’s “ Victory Dance” (Zafer Halayı) and “No Death to us” (bize ölüm yok) have been played the “We are right we will win” (haklıyız kazanacağız) anthem was sang altogether and the statement was ended with Turkish and Greek slogans.
Long Live our death fast resistance
People’s lawyers are our honour
Political prisoners are our honour
Down with fascism long live our struggle
Greece People’s Front