Anti-Imperialist and internationalist solidarity with the Belarus people against the imperialist aggression!

Demonstrators with red flags and a portrait of the Soviet Union founder Vladimir Lenin participate in a rally marking the 100th anniversary of the 1917 Bolshevik Revolution in downtown Moscow on November 7, 2017. / AFP PHOTO / Kirill KUDRYAVTSEV (Photo credit should read KIRILL KUDRYAVTSEV/AFP/Getty Images)

We as Anti-Imperialist Front oppose imperialist meddling into internal affairs of Belarus and support the struggle of its people in its battle to become owners of their own destiny in the struggle against imperialism.

Since this s an event in development we do not wish to take any hasty decisions without base in analysis of internal and external dynamics of Belarus, as well as the relationship of forces involved. That being said, any movement or group which takes action no matter how legitimate and valid its demands are but has no real strength o take over the leadership of the working class, risks becoming a tool of the liberal opposition. As such, rather then leading a conscious class struggle in favour of the toiling masses of Belarus, it is acting against their own interests and in the interests of imperialism. We believe that the primary contradiction is the contradiction between imperialism and people, and before that contradiction is eliminated resolving other contradictions may just make them worse.

Below we reproduce the declaration of Belarus Marxists which expresses its support to the struggle against the neoliberalism and attacks on the living standard of the working class. At the same time, we call Belarus Marxists to give priority to the anti-imperialist struggle without becoming a tool of the liberals.

You have started uniting and making your demands to the authorities. Finally, not the voice of politicians, officials and businessmen, but the voice of WORKERS was heard in the country!

You are outraged by the election fraud and violence by the security forces and riot police. You are tired of poor working conditions and low wages, of lies and injustice, of iniquity and lawlessness. You want a CHANGE.

You were deceived in the election and vote counting processes. But the deception was committed even earlier, when you were given a choice of, in fact, two candidates: either the incumbent president, of whom everyone was tired, or the representative of radical market reforms that is bringing devastation and poverty for the working people.

We didn’t really have a choice! Many voted for Tikhanovskaya only because they were tired of Lukashenko and the policies pursued by his government.

Telegram channels “Nexta” and Telegram chats “97%” have made a great job to convince us believe that we have only one choice of two: either Lukashenko, or Tikhanovskaya against him. We know Lukashenko’s politics the hard way, and we believed that Tikhanovskaya and Babariko and Tsepkalo, who united with her, would bring us freedom, justice and prosperity.

Do you still believe the media? Do you still believe the politicians? And even those who have a lot of money? Do you think that big businessmen are just waiting to come to power to be able to start paying you high salaries, building hospitals and schools? The businessman has one goal – profit at any cost – at the cost of lower wages, layoffs of “excess” workers, reduction the cost of protective equipment, social benefits, reducing the quality of raw materials…

You want a CHANGE, but you are only offered changes in the form of radical market reforms: large-scale privatization of enterprises, sale of land to foreigners, “optimization” of jobs, increase in the share of private medicine and paid education, and many more that may only seem attractive, but in reality will be beneficial only to those who have big money.

No politician, especially a supporter of radical market reforms, will give you freedom, justice and prosperity. This can only be achieved by yourself, by your organized struggle to improve your life.

You have now begun to act collectively to stop the violence and bring a new president to power. But this new president will bring you even greater injustice and a decline in living standards. And he will bring freedom only for businessmen: the freedom to sell enterprises and land, fire you, reduce your wages and social benefits.

As long as we blindly trust politicians and try to elevate them to the presidency on our working shoulders, while we listen to advisers from abroad, how to protest and for what, we will be a blind crowd acting in the interests of others.

Our interest is in the management of factories not by “effective” managers, but by the workers themselves.

Our interest is free quality medicine and education for everyone.

Our interest is preservation of jobs, increase salaries and social benefits.

Our work flag has always been red! Under this flag, the workers take power and responsibility into their own hands, rather than relying on a “good” president.

Down with the white-red-white accomplices of the radical market reformers! Down with foreign advisers!

Let’s stand under the red banners for our Belarusian working people! 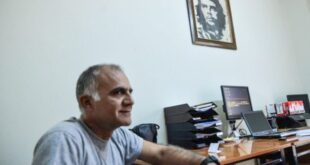