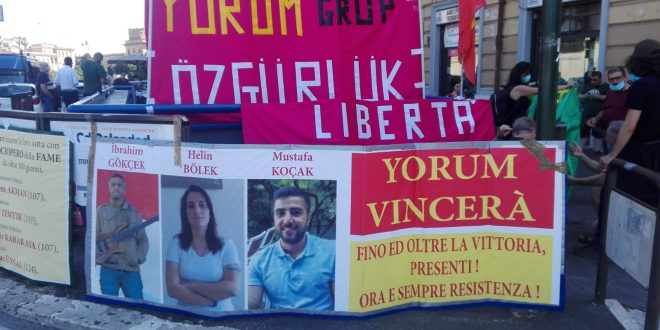 ITALY: Solidarity gathering outside of Turkish Empassy in Rome, for Death Fast Resisters 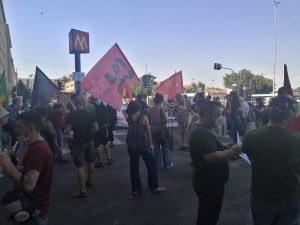 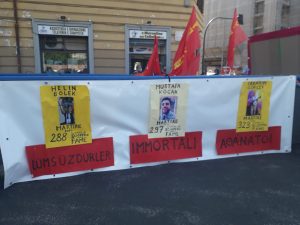 On Friday 26 June 2020 in Rome a protest action was held against the harassment perpetrated by the government in Turkey and in support of the people’s lawyers Aytaç Ünsal and Ebru Timtik calling for a fair trial and to carry out their profession and for the free prisoners Didem Akman and Özgür Karakaya calling for an end to injustice throughout the country and in prisons – the two people’s lawyers and the two political prisoners are in Death Fast, or on hunger strike until death or until their demands are met.

The solidarity action was supported by many groups

on the international left and attracted around 60 people. Over the course of more than two hours, heartfelt appeals were made, music by Grup Yorum was broadcast, Zafer yakında was sung and support slogans were also sung in Turkish by all those present.

In the notification sent to the police headquarters for the garrison, there was also an oral request to deliver a letter to the Ambassador of the Republic of Turkey. However, this was not possible.

We will shortly send it via PEC to the addressee and publish its content.

As the Grup Yorum Solidarity Committee we would like to thank all those who took an active part in the event.

Freedom for all political prisoners!
Freedom for the people’s lawyers!

Our martyrs are our honour!
Helin Bölek, İbrahim Gökçek, Mustafa Koçak are immortal!