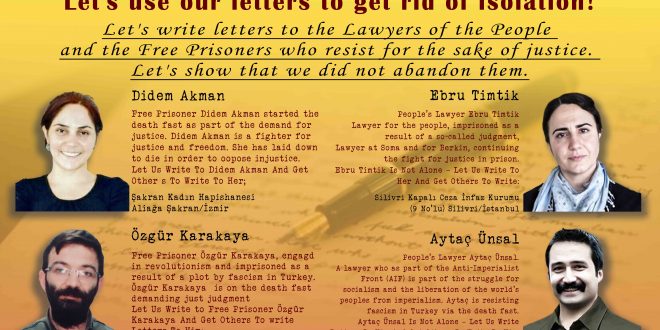 Let’s use our letters to get rid of isolation!

Let’s write letters to the Lawyers of the People and the Free Prisoners who resist for the sake of justice.

Let’s show that we did not abandon them.

Free Prisoner Didem Akman started the death fast as part of the demand for justice. Didem Akman is a fighter for justice and freedom. She has laid down to die in order to oopose injustice.

Let Us Write To Didem Akman And Get Other s To Write To Her;

Free Prisoner Özgür Karakaya, engagd in revolutionism and imprisoned as a result of a plot by fascism in Turkey.

Özgür Karakaya is on the death fast demanding just judgment. Let Us Write to Free Prisoner Özgür Karakaya And Get Others To write Letters To Him;

Lawyer for the people, imprisoned as a result of a so-called judgment,

Lawyer at Soma and for Berkin, continuing the fight for justice in prison.

Ebru Timtik Is Not Alone – Let Us Write To Her And Get Others To Write:

A lawyer who as part of the Anti-Imperialist Front (AIF) is part of the struggle for socialism and the liberation of the world’s peoples from imperialism.

Aytaç is resisting fascism in Turkey via the death fast.

Aytaç Ünsal Is Not Alone – Let Us Write Letters To Him And Get Others To Write To Him: 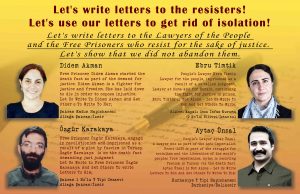