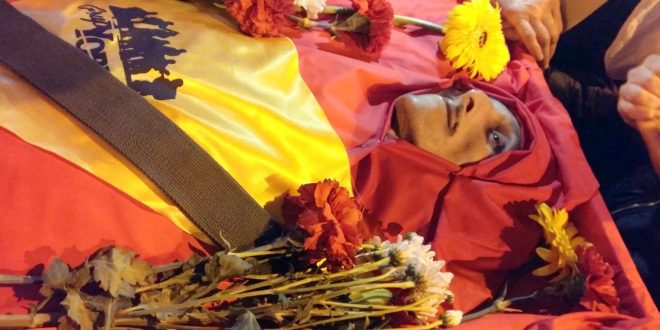 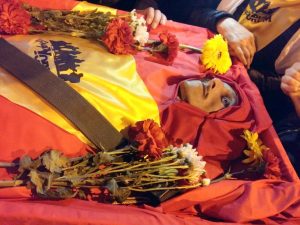 For two days İbrahim Gökçek, in the most atrocious pain of the 323-day-long hunger strike, felt the taste of Political Victory: reached with immense suffering and the unbridgeable loss of his band mate, Helin Bölek.

İbrahim Gökçek two days before the end of his hunger strike,  had been declared by the doctors who were assisting him in the Armutlu Resistance House in Istanbul, in great danger to his life. The doctors had already warned of a disastrous outcome due to the irreversible state of his health: they had declared that even if he had stopped the strike immediately, his life would still be in danger.

The national mobilization of all democratic factions in Turkey, and the international mobilization, allowed the 40-year-old bassist of Grup Yorum to die with the knowledge that from now on we would all take responsibility for what he believed and died for: freedom of expression and art, for Grup Yorum and for all oppressed peoples.

In the letter that Ibrahim released to l’Humanite on 30 April, which was translated into several languages and traveled around the world, he tells first-hand about the reasons that led him and Helin to turn their hunger strike into death fast:

«The reason why we have been included in this “terrorist list” is as follows: in our songs we talk about miners forced to work underground, workers murdered by accidents at work, revolutionaries killed under torture, villagers whose natural environment is destroyed, intellectuals burned, houses destroyed in working-class neighborhoods, the oppression of the Kurdish people and those who resist. To speak of all this in Turkey is considered “terrorism”. Those who have thought for 30 years that it is no longer time for internationalist socialism and that an art like ours has no public are mistaken».

The Grup Yorum Solidarity Committee today greets the last martyr İbrahim Gökçek, remembering Helin Bölek, Grup Yorum’s soloist martyr on April 3 while she was carrying on the same battle, and Mustafa Koçak, political prisoner in Turkey martyred on April 26 during the death fast, for demanding a fair trial.

There are currently four other death fasters in Turkey, in prison: two people’s lawyers (lawyers defending the cause of Grup Yorum) and two political prisoners. Their requests together with those of Grup Yorum must be accepted, they can be accepted, because they comply with Turkish and international laws. We want justice and we will continue the fight for it.

The voice of the people cannot be silenced.

We are right, we will win!