BIGtheme.net http://bigtheme.net/ecommerce/opencart OpenCart Templates
Home » Anti-Imperialist Front » His Guitar In His Hand, His Love For His People In His Heart, İbrahim Gökçek Became A Folk Song 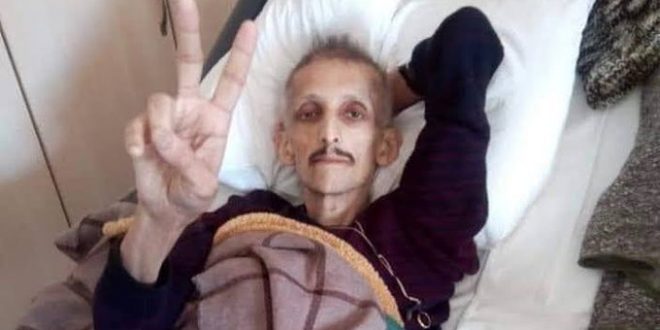 His Guitar In His Hand, His Love For His People In His Heart, İbrahim Gökçek Became A Folk Song

İbrahim Gökçek, the people’s artist and member of Grup Yorum, became immortal with the victory sign on his fingers, his guitar in his hand, his love for his people and his homeland in his heart.

İbrahim Gökçek started the death fast resistance with the demands of abolishing concert bans, ending raids on the Cultural Centre, the release of imprisoned members and the removal of their names from terror lists, in other words, in order to be able to perform their art freely. He resisted with hunger day by day, minute by minute with the same conviction and determination for 323 days… and his comrade Helin became immortal at his side.

Then on the 323rd day of the resistance they declared their political victory… they announced their voices to the world by not succumbing to the attack on art and artists by AKP fascism intended to make them artists of the system, by resisting to the death, they awoke all sections of the people, especially intellectuals and artists, not only in our country but all over the world. They showed the world that art and the artist cannot be silenced and that the power of AKP fascism cannot prevail against artists of the people.

This resistance proved once again the power of folk songs, the power of the art of the people, Helin and İbrahim, the immortal heroes of the resistance. The AKP showed the weakness and helplessness of its fascism. They announced this to the world against all attacks and censorship by the AKP and its media.

And after the victory, we said farewell to İbrahim as he went to immortality today in the hospital where he was admitted for treatment.

Ibrahim became the second martyr of Grup Yorum after Helin…

He wanted to be able to play his guitar…

He wanted to be able to perform his art freely…

He wanted to abolish the bans on revolutionary artists who are enthroned in the hearts of the people, end the bans on the concerts of Grup Yorum and end the repression directed at the art of the people!

Fascism has added yet another to its crimes against the people. As the crimes of AKP fascism grow, so does the people’s anger. That anger will only grow. It will grow and AKP fascism and imperialism will be buried in the dustbin of history…

We know it, we believe it!

İbrahim is now with Helin and Mustafa. We promise them a world where folk songs are sung freely, injustice is eliminated, children laugh… we will unite, organise and get the people to fight to create the world for which they have sacrificed their lives. And we will surely win victory…