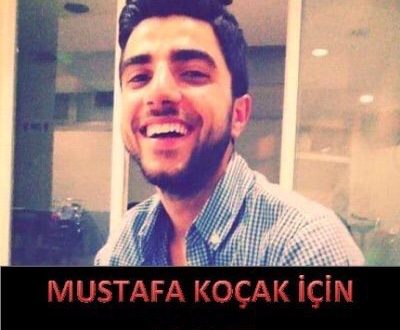 Mustafa Koçak Is Now A Symbol Of Justice And Honour

Helin melted away, body cell by body cell in order to sing her songs freely before our eyes and became immortal, she became a song.

Mustafa resisted for JUSTICE, for HONOUR, for 297 days of hunger, demanding TO BE SATISFIED WITH JUSTICE… he was immortalised with honour in the early morning hours of April 24, becoming a symbol of the search for justice.

Our people are hungry for justice! Our people are in the grip of despair and desperation, in the injustice imposed by imperialism and its collaborator, the fascist AKP government.…

Mustafa and Helin show our people that we are not desperate and without recourse. It shows that by resisting, by fighting against those who impose injustice on us, by fighting, we can destroy the unjust order, and we must destroy it.

Mustafa Koçak was a 28-year-old poor son of the people. He lived with honour, love of the people and the country all his life. They sought to impose dishonour on him. They tried to force him to give false testimony against others under torture, even threatening to rape his pregnant sister. In spite of all these tortures and threats, he kept his dignity and did not become a collaborator.

AKP fascism in the trial concerning the prosecutor Mehmet Selim Kiraz wanted revenge for the account presented to fascism by People’s Liberation Fighters, for fascism had ignored demands for justice in the case of Berkin Elvan, and it was Mustafa that fascism targeted for revenge. People’s Liberation Fighters demanded that they “reveal Berkin’s killers!” and took the prosecutor hostage. Rather than reveal the killers, it preferred to protect them and ignore its prosecutor.

The fascist government, unable to resolve the prosecutor’s hostage situation in any way, chose to sacrifice the children of the people in order to protect its prestige and take revenge. First it tried to get Mustafa to turn informer and sign false statements. After being unable to get him to accept this despite his torture, this time they took a statement from Berk Ercan, a collaborator, denouncing Mustafa, and jailed him. And based on that testimony alone, they gave Mustafa a life sentence of aggravated imprisonment plus 42 years. Another confessor informed the court that he had been made to sign false statements under torture, but the court did not take this into account.

The witness statement that led to Mustafa’s sentencing consisted of the sentence ”Mustafa told me this in the kebab shop”. There was no other evidence. During the course of the trial, all requests of the defence were denied, and everything in Mustafa’s favor was ignored.

Mustafa did not bow to dishonour in torture nor did he bow to this injustice. He began his resistance in the death fast by saying I WANT JUSTICE.

He began his death fast only for the right to a fair trial, only for a hearing concerning the witness who had lied about him. Day after day, he resisted with honour.

Not listening to his demands, AKP fascism, fearing the strength of the resistance that drove the demand for JUSTICE, used force-feeding on Mustafa. It was afraid because of the effect that the demand for JUSTICE would have on the people, that the people would resist for justice, that this would bring about the end of their system… They carried out the most savage, most depraved and dishonest attacks to prevent this. They kidnapped Mustafa from the prison where he was staying and handcuffed him to the bed by his throat and arms. They put an intravenous tube in his arms 73 times, bursting veins. As though this were not enough, he was subject to object rape with a truncheon. All this torture and depravity was committed by the AKP’s fascist police, the prosecutor, the prison director, the guards and the Mengele doctors who trampled on the honour of their profession. Mustafa resisted these tortures for four days and kept his honour. He overpowered the torturers with the strength he gained from his rightness and legitimacy, and he continued to say that he WANTED JUSTICE.

While he resisted with his 29-kilo body, his family, his lawyers, his comrades and our people tried every method to make their voices heard, to pressure fascism and meet Mustafa’s demand. His family became his voice every day he was detained. The People’s Lawyers asked every authority to meet Mustafa’s request every day, and they filed petitions every day. His comrades and our people have been his voice and his demand for justice in Turkey and all over the world.

Mustafa resisted day by day with his body meltıng away, despite all his suffering… Breathless… “What do these pains, these torments do to us; our honour remains to us,” he said with his last breath, immortalised.

Mustafa Koçak is a symbol of Justice and Honour today…

Mustafa Koçak for Justice, For Honour Day by day, cell by cell melted and fell martyr…

Ibrahim Gökçek, a member of Grup Yorum, Didem Akman and Özgür Karakaya, the People’s Lawyers Ebru Timtik and Aytaç Ünsal continue their resistance to the death fast. They want justice too, they want to sing their songs freely.

It’s up to us to keep them alive!

Let us stop the injustice of fascism, let us embrace the demands of our resisters, let us strengthen their resistance!

Solidarity is the weapon of the people, let us build up our solidarity!