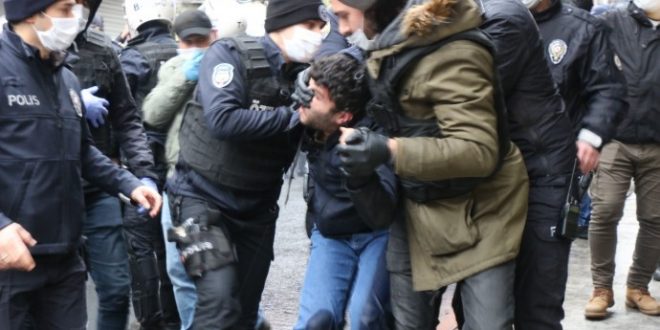 The funeral of Grup Yorum’s member Helin Bolek who passed away on Friday after 288 days of hunger strike, was celebrated yesterday and was marked by incidents provoked by the AKP’s police attempting to disrupt it. At the beginning of the funeral two drivers were arrested and the police threatened to kidnap the coffin. Using the excuse of coronavirus pandemics the police blocked Okmeydani district and prevented the entrance. Istanbul’s Okmeydani district is where Grup Yorum’s Cultural Center “Idil” is located. Finally the police allowed the funeral to proceed, but only towards the Ferikoy cemetary.

The people who came to Okmeydani to bid the final farewell to Helin, including her friends and Grup Yorum fans, waited for the procession to appear. The police has intervened and arrested them. Those that came directly to the Ferikoy cementary were also prevented from attending by the police and arrested. In total, 30 persons were arrested and have not been released at the time of this writing. During the intervention the police used tear gas and armoured vehicles.