BIGtheme.net http://bigtheme.net/ecommerce/opencart OpenCart Templates
Home » Solidarity » FOR THE COMRADES NOT A MINUTE OF SILENCE, BUT A LIFETIME OF STRUGGLE! 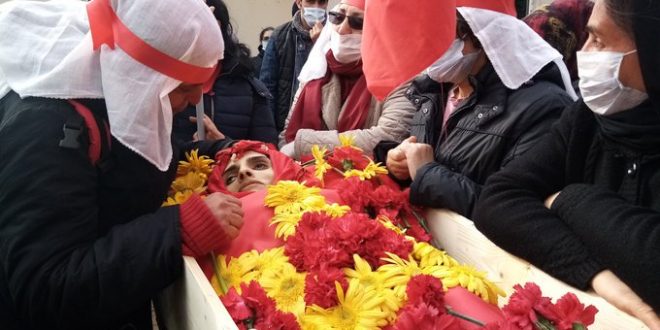 FOR THE COMRADES NOT A MINUTE OF SILENCE, BUT A LIFETIME OF STRUGGLE!

FOR THE COMRADES NOT A MINUTE OF SILENCE, BUT A LIFETIME OF STRUGGLE!
JUSTICE TO HELİN BÖLEK, MEMBER OF GRUP YORUM WHO OFFERED HER LIFE IN A HUNGER STRIKE!

In front of the painful death of oye comrade Helin Bölek, member of Grup Yorum, we, students and young people manifestate our solidarity with all the turkish revolutionaries because of this big loss.
The imperialism and turkish State, prefered to let die Helin Bölek, who was in a 288 days hunger strike, before solve her fair demands.

We offered our sincere condolence and our compromise with the revolutionary fight of the world’s people.
From México, as young people, we reject with a lot of anger, this new crime against the turkish people and the world- people.
Helin’s fight makes grow our conscience and reafirms the need of continue fighting against the imperialism.

Helin’s death will not be in vain, the blood sheed by our people Will boy ve un vain, because we are condemned yo win.

As young people, the crime against Helin show us that in the capitalism we have nothing.

Our only exit is the Revolution.

Dear Grup Yorum: thank You for your work, your solidarity and your compromise.

¡Honor and Gloria to Helin Bolek!