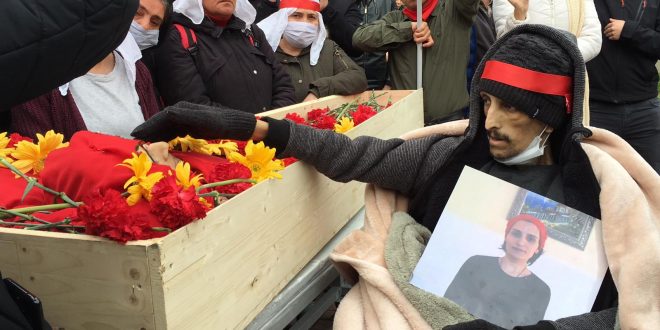 People’s Front (Halk Cephesi) of Greece Statement: Helin Martyred! İbrahim Is On The Verge Of Death!

Helin Bölek, one of the artists who works for the music group from Turkey Grup Yorum, making art for the people, has sacrificed herself for the sake of artistic freedom. She died today on the 288th day of the Death Fast resistance and joined the caravan of the immortals.

AKP fascism has left behind all previous governments when it comes to persecution, exploitation and injustice. As a loyal servant of imperialism, in 18 years there is nothing it has not done in the name of exploitation and oppression in our country. Poverty, hunger and unemployment have increased. AKP fascism has left nothing unsold of the soil of our homeland… There is nothing of our soil and natural resources that has not been sold… injustice, theft, looting and plunder have been the name of the AKP government.

The music group did not remain silent as it was necessary to make people’s art against the system of persecution imposed on our people by AKP fascism. Against fascism and imperialism, it has brought our people together in the millions… The voice of the people’s suffering, anger and struggle was given breath.…

In order to silence the art of the people who were brought together in the millions, fascism has arrested members of the group, banned their concerts, raided cultural centres many times. Grup Yorum responded with resistance to fascism’s attacks, with death fasts.

Helin Börek was martyred on the 288th day of her honourable resistance to fascism and imperialism.

Imperialism and fascism are the murderers of Grup Yorum member Helin Bölek. AKP fascism continues to escalate its crimes. As its crimes escalate, so will the price it pays become more severe… We will demand a reckoning from the AKP fascism that murdered Helin Bölek…

We warn AKP fascism: remove the barriers to free people’s art, release imprisoned Grup Yorum members, abolish the terror lists, stop bans on concerts and raids on the culture centre! AKP fascism is responsible for all the deaths that will occur!

Just recently, they said, ”Let them stop the resistance, then we’ll think about it.” It is the infamy of fascism to negotiate over the lives of our comrades… It is despicable to offer conditions in the face of lives, a confession of their guilt as murderers. THEIR CRIMES WILL NOT GO UNPUNISHED!

A system in which artists have to put their own lives on the line for the sake of their art is rotten and doomed to perish!

Our people; Ibrahim Gökçek, a member of Grup Yorum, and Mustafa Koçak, who continues his death fast by demanding justice, are at death’s door! Let us be their voices, let us carry their voices all over the world! Let’s not let fascism kill them too!

Grup Yorum has thus far used its art to illuminate the path of the people’s struggle against fascism, capitalism and imperialism. Now it continues to illuminate this path with its heroic martyrs!

We call on all our people, intellectuals, artists, to show support at the funeral of your hero Helin Bölek in the house of resistance in Armutlu district. Let’s go to the resistance house in the Armutlu neighbourhood to stop the deaths.

Grup Yorum Is The People And Cannot Be Silenced! 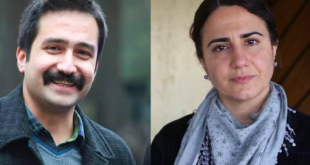 To the Press and Public,

Both Turkey and the international public actually know; the unlawful investigation and prosecution which had ...