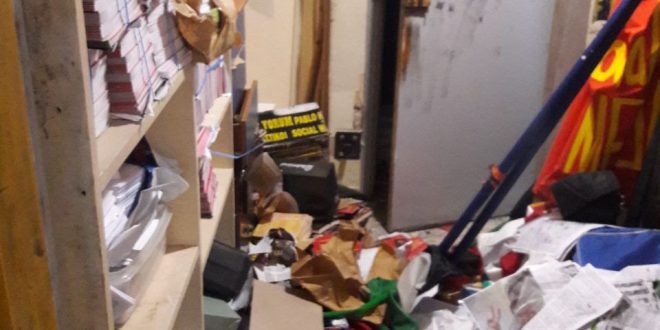 Engaging In Revolution Is A Duty, Not A Crime!
We Are Not Terrorists, We Are Revolutionaries, The Real Terrorists Are Imperialists And Their Local Collaborators!

The Greek state which collaborates with imperialism has once again used repression against Revolutionaries from Turkey. In two separate areas of the capital city Athens, two separate institutions were raided and a total of 26 revolutionaries arrested in them or while walking on the street. The doors were broken in the places where they were staying, special action police wearing ski masks and carrying heavy weapons detained them using torture.

This is not the first time this has happened in Greece. Previously, as a result of operations carried out on the orders of America and in collaboration with Turkey, revolutionaries were detained, tortured and spent years in prison.

The state in Greece which serves imperialism continues to attack revolutionaries on its orders. Because in attacking revolutionaries imperialism sees its own end. The imperialists have said, “We will prevent anyone in world from gaining hope from the Marxist-Leninist ideology.” The imperialists, who spill blood throughout the world, occupy countries, massacre the peoples, leave them hungry and exploit them to the marrow know very well that their systems will not last forever and they cannot prevent the laws of history unfolding. But to delay their end a little longer they repress revolutionaries, in particular those resist imperialism, and all peoples and organisations who do not surrender…

IMPERIALISM WILL BE DEFEATED, THE PEOPLE THAT RESIST WILL WIN!

Imperialism may attack to its heart’s content, we will continue to spread the Marxist-Leninist ideology which builds up the hopes of the peoples and tears down imperialism’s exploitation and tyranny. We will not be victims of imperialism, we will be its executioners. We will bury imperialism and its local collaborators and fascist governments in the dustbin of history.
Imperialism and its local collaborators are not simply attacking a few revolutionaries. They are essentially atacking the Marxist-Leninist ideology, which is the ideology that equips the organised vanguard of the people. That is why they used over a thousand police with ski mask and heavy weapons with lasers attached in this operation. They expected revolutionaries to give in and surrender to this “great force”.

They think that by getting revolutionaries to surrender they will escape their own end. But they are not up against individuals who will give in and surrender. For to give in would betray our people and the peoples of the world. We did not give in, we did not surrender to the tyranny and repression of imperialism.

More than a thousand Greek police raided and used torture but the resistance they encountered and the refusal to give in surprised them and caused them to take a step back from the repression and arbitrary behaviour they were using.

However, again they entered and plundered our institutions, scattered belongings around, broke doors and windows and took all computers and telephones in in an attempt to stop our institutions from functioning.

They tortured all revolutionaries without exception. A 65-year-old revolutionary was twice injured in the arm by sound and flash bombs and received burn injuries to the skin. One of our Death Fast veterans who is 55 and has difficulty walking was handcuffed from behind, dragged along the ground and tortured.

Once again we warn all imperialists and their local collaborators and in particular US imperialism. We will emerge from every one of your attacks stronger. We are not your victims, we will be the executioners of your system of vile exploitation and tyranny. And we will demand a reckoning for your every act of torture, tyranny and repression…
We repeat: revolution is not a crime, it is a duty. We will raise our voices as loudly as possible against your all the pains experienced by the world’s peoples as a result of imperialism’s tyranny and exploitation, and there is nothing more right and legitimate than fighting this system of tyranny and oppression. Tearing down this system of tyranny and oppression and burying it in the dustbin of history is our obligation!

Engaging In Revolution Is Not A Crime But A Duty!
Imperialism Will Be Defeated, The Peoples Will Win!
We Will Not Be Victims Of Imperialism, We Will Be Its Executioners!