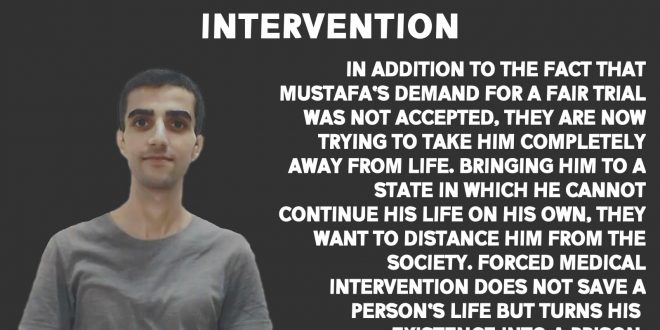 Mustafa Koçak’s resistance continued with death fast (hunger strike until death or until his demands are accepted) in Sakran prison (Izmir, western Turkey). Transferred on March 13 to the hospital of the same prison for forced feeding, he did not give up and continued his fight against injustice.
His family and lawyers gathered in front of the prison to make sure that the authorities did not harm him with forced feeding. Last night he was transported by ambulance to Izmir F-type Kiriklar Prison No. 1 without his family being informed.
TORTURE IN SAKRAN:
Now, after he was able to talk to his lawyer, the brutality of the torture they did to Mustafa in Sakran was made public:
He said he had resisted forced feeding and torture for five days.
– He was shot 73 bottles of serum… – Mustafa’s arm is full of bruises… – His head was also hit because he tried to remove the serum with his teeth… – He’s been handcuffs with 8 handcuffs all over his body… They put something in his mouth to stop him from screaming… – His head and his body were tied with ropes – They told him: “We will paralyze you and let you go” – Mustafa said that many secret service officers were present, as well as the doctors, the prison prosecutor and the the director of the prison. He said that they all assisted in what happened and that from time to time they also joined together to help with the torture. He wasn’t allowed to go to the toilet, he was forced to urinate on himself, and he wasn’t washed.- He was sexually abused, putting a baton up his anus.- He was insulted, offended, abused.- When he tried to take the serum off, they put it on his legs by force.- And then they tortured him psychologically with laughter and said: “Oh, you woke up, you feel good now, don’t you Mustafa?”
While using all those crimes of torture, his lawyers and family were prevented from seeing him under the pretext that his immune system was too weak and that it could be a risk for him to stay in the cell because of the coronavirus!
Mustafa has a message for us: “I will continue my resistance. The veins that have broken me are my honour!”
WHY IS MUSTAFA KOCAK RESISTING?
He was sentenced to life imprisonment, only because of a statement, which was signed under torture by the police and was even retracted later! All he wants is a fair trial! All current news about the case is posted on our Facebook account Anadolu Newsblog and on Twitter by the solidarity group #FreeGrupYorum.