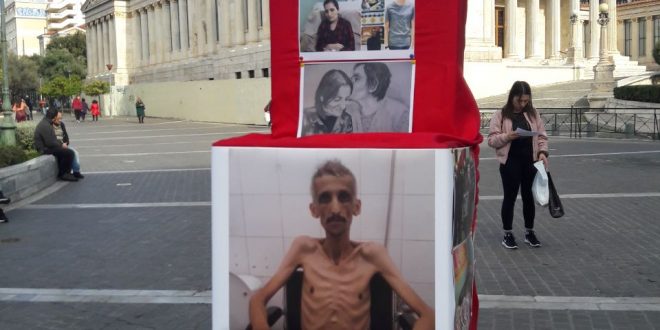 *death fast is a higher level of indefinite hunger strike, which continues until the definite acceptance of demands

Grup Yorum is an organization of artists for the People in Turkey.

The band is very popular in Turkey and abroad. Over the years Grup Yurom have play in front of thousands of people in citties across Turkey and across the world. Their popularity, revolutionary songs and committed concerts provoked the repression of the regime of Erdoğan which criminalized them and called them terrorists.

The members of Grup Yorum are on hunger strike for their rights of expression and to oppose the repression that is taking place against them and their supporters in Turkey and abroad. Their right is the rights of the oppressed people in Turkey and all over the world.

Over the years the the government has used a series of false terror charges against Grup Yurom members, and has tried to ban the group from playing live concerts. Several members have been incacerated and tortured, female prisoners have had their hair pulled out, whilst other have been held in solitary confinement deprived of sleep and severely beaten, as part of the governments crackdown on free speech which is tantamount to fascism. The AKP regime has placed a 300.000 lira price on each members head. The police have repeatly attacked the Idil Cultural Centre where grup Yuron carries out its work. The police haave voilently attacked people inside the building and smashed music instruments with impunity.

The resistance of Grup Yorum has to be considered as part of a general resistance against the emergency state policy. Workers, writers, artists, political activists, all sections of people are under constant repression of the state and continously resistance seems to be the only way to defend even minimal rights during this period. The government’s attempt to silence any resistance is ongoing with attacks on selected democratic forces.

Grup Yorum represents hope and has become a great example. It faces repression, because it never accepted to make arts within the rules of the system, but with the aim to enforce and spread popular culture and solidarity by calling the people to struggle.

The situation of the hunger strikers is getting seriously.

The two Grup Yorum members who were abducted by the police on March 13, 2020 from the Resistance House in Istanbul’s Küçük Armutlu district and placed in a hospital under strong security measures, have now been taken to force-feeding. They are fully conscious and they rejected any medical intervention, and oppose the force-feeding process which might kill them or disable them for life.

Members of the group are demanding:

– The removal of Grup Yorum members from the list of persons wanted by the Ministry.

– The removal of the ban on Grup Yorum concerts, all of which have been banned for almost three years.

– The cessation of the charges against the members of Grup Yorum.

– The release of all members of Grup Yorum.

Mustafa Koçak, 28 years old, was targeted by the Turkish police like many progressive, oppositional people in Turkey, without any proof was sentenced to life imprisonment, simply based on the false statement the police prepared against him. No proof, no investigation, just a lie should make him spend his life in prison.

He was detained and pressured by the anti-terror-police to cooperate and make a statement against a number of left oppositional persons. Police used torture against him to reach this goal, but he refused to be a tool of state repression.

The police wanted to find people guilty and gain success in a political case, so they decided to use the same scenario against Mustafa. They detained another person, interrogated, tortured and threatened that person to sign a police protocol with false statements to be used against Mustafa before court. Mustafa was finally sentenced

Mustafa decided to struggle for justice and to go on hunger strike against this unfair trial and the methods used by the police.

Mustafa now weighs only 38 kilograms and his life is in danger. Like Grup Yorum members he is threatened with force-feeding.

On 13th March 2020, in Şakran prison, AKP fascism attempted force-feeding on death fast hunger striker Mustafa Koçak. The comrade refused force-feeding and resisted. Mustafa Koçak has removed the serum and continues his resistance. The state and the prison banned his visitors, so they can’t enter the prison to see Mustafa. Police closed also the road to prison, so it is not possible for Mustafa’s family and lawyers to approach the prison.