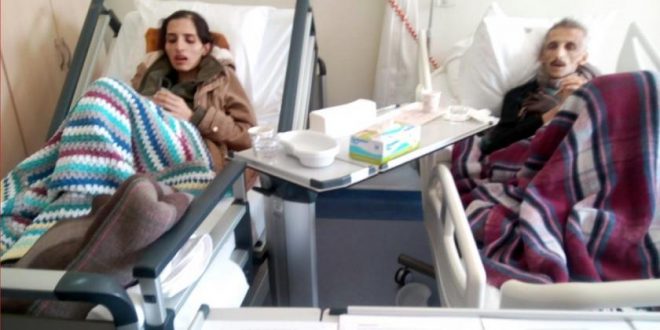 Grup Yorum Members on Death Fast Abducted by the Police

Around 03:00 on March 11, 2020, the House of Resistance, located in Istanbul’s Kucuk Amurtlu neighborhood, where members of the Grup Yorum, Ibrahim Gökçek and Helin Bölek, continue their Hunger Strike til Death(Death Fast) were attacked by police SWAT teams.The house was stormed by heavily-armed SWAT teams who forced everyone inside the home, to lie down on the ground and then handcuffed them. SWAT teams members said the assault on the home was “aimed at conducting a search for evidences of conducted crime.”After handcuffing everyone, the SWAT teams members forcibly took Ibrahim Göchek and Helin Bölek out of the house. During the assault, SWAT struck the mother of Helin Bölek – Aygul Bilgi and Kubra Sunnetci, who takes care of Helin. Police detained Yurdagül Gümüs, a former political prisoner, a veteran of the 19-22 December 2000 prisons massacre.
In addition to the House of Resistance, the SWAT temas stormed the local Alevi house of worship(Cem evi). The police threw away the belongings in the ceremonial hall and the canteen of the temple, and they did not hesitate to raid the morgue of the house of worship, where the dead body of a resident of Kuchuk Amurtlu neighborhood was located at that time.According to the information available at this moment a total of 6 people have been detained during the police raids.

Police have abducted hunger strikers and the prosecutor said to keep them in hospital by force. They are keeping them in Umraniye hospital.

Members of the Grup Yorum – Ibrahim Gökçek and Helin Bölek, who have been on a hunger strike till death (Death Fast) for more than 260 days, are now skin and bones. The AKP’s (the ruling party in Turkey) fascist government has once again shown what tremendous fear it has with the resistance of the Grup Yorum. During the Great Death Fast Resistance from 2000 to 2007, against the isolation in prisons, the death squads(SWAT teams) armed to the teeth attacked the Kucuk Amurtlu neighborhood. During the November 5, 2001 attack, fascist SWAT teams attacked a home that contained participants in the Death Fast resistance at that time, death squads did not hesitate to set on fire the house, kidnap the hunger strike participants, undergo forced medical intervention. Thus, they mutilated a part of them, and another part were killed, and at the same time they killed relatives of the participants in the hunger strike. Ibrahim Gökçek and Helin Bölek are facing the danger of forced medical intervention. Forced medical intervention is torture, murder. Any negative consequences that would result from an intervention that would be carried out against the will of Ibrahim and Helin, the responsibility and guilt for this would belong to the doctors who carried out the intervention and the police officers who forced them to do so.

Torture is a crime against humanity, it has no statute of limitations. During previous mass Death Fast resistance, attempts were made against the participants to perform a forced medical intervention against their will. These attempts resulted in the death, mutilation or lasting adverse effects on the health of the participants in the Death Fast resistance.Our call to our people, intellectuals, people of art, let us make phone calls to of the hospitals in Istanbul and the area, go to the hospitals, ask where Ibrahim and Helin are, prevent the forced medical intervention.

All that can happen with Ibrahim and Helin are the responsibility of the doctors who have agreed to carry out a forced medical intervention, the Istanbul Security Directorate (Regional Police Department), Minister of Interior Soysuz Suleyman (Suleyman Soylu), and the political power at whole. Torture has no statute of limitation: the executioners will be called to account. In case of forced medical intervention against the Death Fast Resisters – Ibrahim and Helin, a very high price will be paid!

Forced medical intervention is torture, murder!
Torture is an abomination!
Freedom to all comrades that police arrested them in the House of Resistance!
Freedom to Grup Yorum!
All their demands must be accept it!