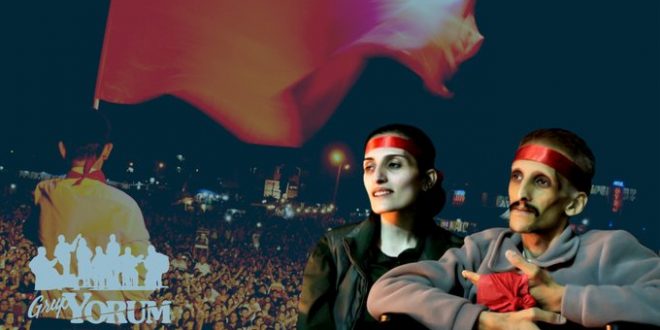 Ibrahim Gökçek and Helin Bölek were kidnapped by SWAT teams

Last night, March 11, 2020, Turkish police SWAT teams raided the Resistance House in the Kucuk Amurtlu district of Istanbul.
Ibrahim Gökçek and Helin Bölek were there to continue their hunger strike to the death, until their demands were accepted. They want to live but they want to live with dignity, a dignity that belongs to everyone. They are our barricade against Turkish fascism supported by Western imperialist powers.

The resistance house in Amurtlu was stormed by heavily armed SWAT teams that forced everyone inside the house to lie down on the ground and then handcuffed. The members of the SWAT teams said that the assault on the house was “aimed at conducting a search for evidence for a crime committed”.

After handcuffing everyone, SWAT team members forced Ibrahim Göchek and Helin Bölek from the house. During the assault, SWAT hit Helin Bölek’s mother – Aygul Bilgi and Kubra Sunnetci, who were taking care of Helin and Ibrhaim. The police arrested Yurdagül Gümüs, a former political prisoner, a veteran of the 19-22 December 2000 prison massacre.

In addition to the Resistance House, SWAT teams stormed the local Alevita Worship House (Cem evi). The police threw away personal belongings in the ceremonial hall and the temple table, and did not hesitate to raid the obituary of the house of worship, where the corpse of a resident of the Kuchuk Amurtlu neighborhood was located.

According to information available at this time, a total of 6 people were arrested during police raids.

Grup Yorum members, Ibrahim Gökçek and Helin Bölek, who have been on Death Fast for more than 260 days, and are now skin and bones, have been forcibly transported to the Sağlık Bilimleri Üniversitesi Hastanesi hospital in Istanbul. For now there is no certainty about what will be done to them, but they are at high risk of forced feeding.
No one was able to stay with them, only their close family members. The hospital is currently surrounded by a large deployment of police forces.

The hunger strike and forced feeding

The hunger strike has been used by political prisoners around the world to oppose imprisonment policies, violation of rights and treatment incompatible with human dignity.
Hunger strike is an extreme weapon of rebels and revolutionaries in jail or persecuted, who have no other way to bring out their screams for freedom, to make known the often infamous and terrible conditions in which they are forced to live under the blows of repression.

Forced feeding consists of inserting a tube into the nose and throat through which a dense fluid is passed to the stomach. The tube is inserted into the nose and in some cases caused the prisoners to bleed or vomit with blood.
The Special Rapporteur on Torture reminded authorities that “it is not acceptable to use threats, forced feeding or other types of physical or mental coercion against individuals who have chosen to use the extreme resource of hunger strike to assert their rights.”

Due to such interventions between 2000 and 2007 (hunger strike to death against isolation prisons) many political prisoners in Turkey have completely lost their memories, have fallen ill with Wernicke-Korsakov syndrome and some have been literally killed.

The responsibility and blame for the negative consequences that would result from a forced feeding operation carried out against the wishes of Ibrahim and Helin would belong to the doctors who carried out the operation and the police officers who forced them to do so.

Torture is a crime against humanity, it has no prescription limits. During the previous Death Fast mass resistance, attempts were made against the participants to perform a forced medical intervention against their will. These attempts led to death, mutilation, or lasting adverse effects on the health of Death Fast resistance participants.

Everything that can happen with Ibrahim and Helin is the responsibility of the doctors who agreed to carry out forced medical intervention, the Istanbul Security Directorate (Regional Police Department), Interior Minister Soysuz Suleyman (Suleyman Soylu), and the political power as a whole.

Torture is not subject to prescription: the perpetrators will be held accountable for their actions. In case of forced medical intervention against the resistance in Death Fas, Ibrahim and Helin, a very high price will be paid!

The fascist government of the AKP (the ruling party in Turkey) has once again demonstrated its enormous fear for the resistance of the Grup Yorum.

To all of us who are outside, the decision taken shouts out to not give up, to never stop fighting, to continue on our difficult path which is its own and that of all the revolutionary comrades who are with Helin and Ibrahim.

We demand the immediate release of all the revolutionary prisoners of the Turkish fascist prisons!

Freedom for the Turkish people and for all the peoples in struggle!

Freedom for all political prisoners!

We will not forget!