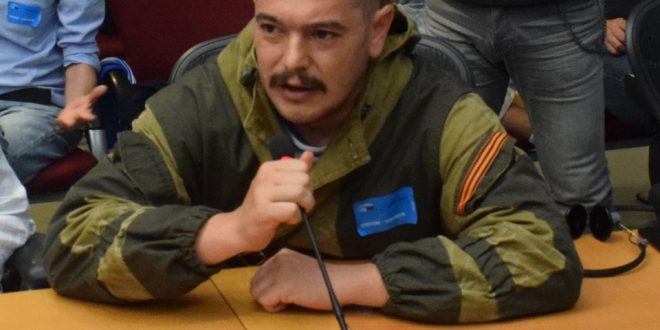 An Italian internationalist communist militant, Riccardo Sotgia, is under investigation by the Ukrainian Prosecutor General’s Office for the heavy accusations of armed gangs, intelligence and terrorism. All this for taking part as an international observer in the elections in Lugansk and for bringing solidarity to the people of Donbass.

He will be interrogated next Friday by Digos on the behalf of the Deputy Prosecutor of Brescia, holder of an international letter rogatory requested by Ukrainian magistrates.

The precedents.
Sotgia’s case is not isolated. Some time ago, other militants of the Antifascist Caravan were investigated by the Kiev Prosecutor’s Office with the same hypothesis of crime.

The reply.
Riccardo replies to the accusations saying that he has been in Donbass three times: the first as an international observer during the elections in the People’s Republic of Lugansk, delegate of the “Antifascist Ukraine Coordination”. The other two in the wake of the “Antifascist Caravan” created six years ago by the Banda Bassotti, whose activity was public and open to all.

The penalty.
Riccardo risks extradition to Ukraine to be put on trial.

It is not a crime to travel to another country, to bring solidarity and humanitarian aid together with many other Italians on an organized and public trip. It is not a crime to be part of a group of international observers so that one can be a guarantee of legitimacy and not interfere in a country’s elections. However, this does not matter to Ukrainian fascism. The main thing is that Riccardo Sotgia is a communist, an anti-fascist, an anti-imperialist. This is what Ukrainian fascism sees as a crime. Going to Donbass is considered a “crime” because it is seen as an expression of anti-fascist ideas.

The Donbass has been a war-torn region since 2014. They are fighting for their independence from Ukraine because they do not feel they belong to a neo-Nazi state. It is worth remembering how in Ukraine the “Azov Battalion” is allowed to create colonies for children from 9 to 17 years of age to provide the first rudiments for the use of weapons. That is a crime! Cooperating – as Italy is doing and as all imperialist countries do – with Ukraine is a crime!

To guarantee the unity of the peoples against imperialism and fascism is not a crime, but an honourable duty.

Being internationalist and anti-fascist is not a crime, it is an honourable duty.