BIGtheme.net http://bigtheme.net/ecommerce/opencart OpenCart Templates
Home » Internatıonal News » REVOLUTIONARY PROCESS, THE COLLAPSE OF PEACE NEGOTIATIONS and THE EXTRAJUDICIAL KILLINGS IN THE NAME OF „WAR ON DRUGS“ IN THE PHILIPPINES 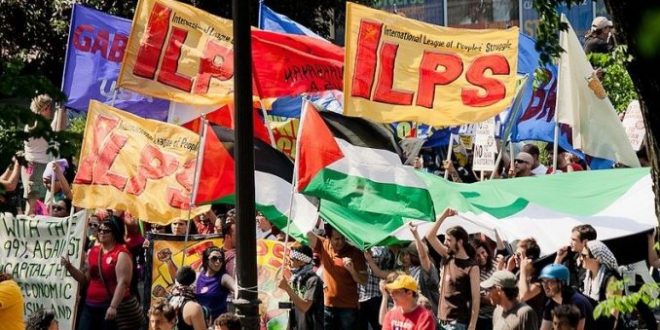 REVOLUTIONARY PROCESS, THE COLLAPSE OF PEACE NEGOTIATIONS and THE EXTRAJUDICIAL KILLINGS IN THE NAME OF „WAR ON DRUGS“ IN THE PHILIPPINES

Anti-Imperialist Front interviewed ILPS about the revolutionary proces, the collapse of peace negotiations and extrajudicial killings in the name of “war on drugs” in the Philippines.

AIF: First of all we want to remind the peace talks in the Philippines, which were implemented in August 2016 and continued approximately 7 months. Main subjects of this talks initiated by the Communist Party of the Philippines were discussion and agreement on constitutional, political and socio-economical reforms, including the free land distribution to landless farmers, as well as the Comprehensive Agreement on Respect for Human Rights and International Humanitarian Law (CARHRIHL).

ILPS Austria: In the course of this talks the Philippine government proposed a bilateral ceasefire between the two parties in the end of February 2017.

But the government threatened to end ceasefire, whenever NPA reacted to the attacks of Armed Forces of the Philippines (AFP), the Philippine National Police (PNP) and paramilitary forces (including private security agencies and vigilante groups).

The Duterte government completely ignored the proposals by the NDFP and terminated the peace talks, accusing the NDFP of insincerity in the peace negotiations, blamed it for the continuing revolutionary armed conflict and started to spread propaganda aimed at preparing the public mind for the proclamation of martial law nationwide.

The poor population in the Philippines is confronted with new state violence namely the „war on drugs“. State of emergency laws authorize the national police and military to execute any person suspect of drug dealing or consumption. Human rights organisations speak about 27.000-30.000 people extrajudicial executed by this policy within the last few years.

AIF: Could you tell more about this?

ILPS Austria: Now with president Duterte’s campaign named „War on drugs“ more people are expected to die through extrajudicial killings. The „Oplaan Double Barrer“ (counter-insurgency program of the military) targets the poor people in the community in the name of „war on drugs“. The war on drugs campaign will continue to kill and affect much more people and also political activists.

The purpose of this politics is to silence the people to protest against the dictatorship. They want all political activists to go to jail. Now the political activists are not able to speak up without being targeted and sent to prison without chargement. Police plots, just as planting arms in the bag or car of political militants are used frequently to bring them to jail.

AIF: What is the approach of the communist movement in the Philippines to this serious human rights violations? If there is, already success in the campaign?

ILPS Austria: Cases of human rights violations are meticulously and carefully documented and exposed as quickly as possible. Recurrences over time and space are analysed in context and presented to the people, to local and international public institutions.

To address the basic and offshoot problems of the country, the Party, the people´s army and other revolutionary forces exist and operate on a national scale and in depth through clandestinity and countryside basing. The enemy forces do not have the precise knowledge and capability to attack and destroy the revolutionary forces all at once even under martial law and fascist dictatorship. They are liable to rob, abduct, torture and murder many people as they are already doing on an expanded scale.

The Party has a strong basis for the confidence in winning greater victories in the battlefield. The more the US-Duterte regime deploys and overstretches its military, police and paramilitary forces against the NPA the more will it make these forces available for NPA tactical offensives and provide opportunities for the NPA to seize weapons and other supplies from these forces.

AIF: What are your ideas to extend the solidarity with the struggle in the Philippines? How could we connect our struggle?

ILPS Austria: Fifty-one years after the founding of the Maoist guerrilla army, the fight is not over, history takes its course. And it’s time to start a new chapter., with solidarity taking a special role.

It is important that we strike a balance between the pursuit of our own struggle, and solidarity toward others. Together we have to act – here and now.

Digital technology makes it possible to quickly connect. But it is solidarity, solidarity on different levels using multiple platforms, that has the power to make our local struggles move forward.

It is for this reason that we invite all anti-imperialist and democratic movements to the International League of Peoples’ Struggle (ILPS). ILPS is an international organization established in May 2001 at Zutphen in the Netherlands, that seeks to enhance the spirit of solidarity through concrete coordinated action.

AIF: There are interesting examples of struggles against drugs by socialist movement f.e. in Turkey, who are targetted by the state because they want to create alternatives and heal people from drug dependency by establishig treatment centers. Already a couple of people, as Hasan Ferit Gedik were killed by gangs protected by the police, because of their active struggle against drugs. People get arrested, etc

How do you evaluate the problem of drugs as revolutionaries and communists? Which struggle methods can we find short time to finish the problem of drugs, when the long-term solution is social justice the end of poverty? How can we help people to re-socialize and be part of society?

ILPS Austria : We, too, view the problem of drugs in a larger context. Our response should be holistic and address the inter-related medical, psychological, social, economic, and legal issues on the individual/family, community and national levels. Initial details of this would have been discussed within the framework of the CASER negotiations. We are with the Rise Up in their objectives, such as: