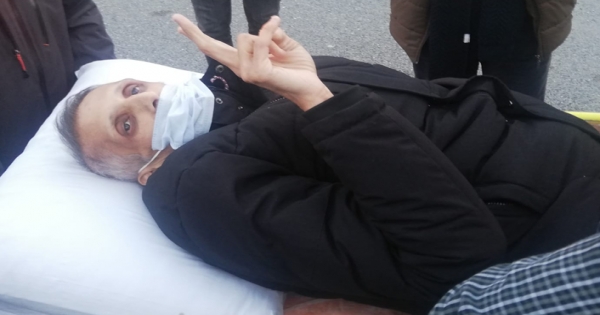 This Is The Victory Of The Death Fast Resistance

İbrahim Gökçek was detained and arrested at Idil Culture Centre on February 26, 2019.

Ibrahim Gökçek was arrested because fascism in Turkey wanted to ban the concerts of Grup Yorum and to impede their work. The government put a 300,000 Turkish lira price on the head of each Grup Yorum member. They arrested 10 members of Grup Yorum. They repeatedly attacked the Idil Culture Centre, where the group carries on its work, with police equipped with long-barrelled weapons, tortured its workers, looted their belongings, made the Idil Culture Centre unusable, and broke the musical instruments in the Centre.

In the last three years Idil Culture Centre was attacked by the police of AKP fascism on eight occasions, looted, rendered unusable, rebuilt every time, despite numerous arrests, and its work continued.

AKP fascism also targeted Grup Yorum in its war against the people. Because, Grup Yorum has been an indestructible fortress of the art field in the Anatolian people’s war against fascism.

Ten Grup Yorum members have been imprisoned and there have been rewards offered for seven more, but the group has continued to produce, composing 45 new productions over two years.

This is a war. With the group both resisting and continuing to produce.

This resistance won another victory today. Ibrahim Gökçek, member of Grup Yorum, is on the 252.day of the Death Fast resistance. he was released on the day with a report that he “cannot remain in prison due to health problems”.

This release is a victory of the death fast resistance.

It has been seen once again that it is possible to resist and triumph in conditions of fascism.

Once again it has been seen that the only commander who cannot be made to surrender is one who resists.

As the Antı-Imperialist Front, we salute the Death Fast resistance of the Grup Yorum and its victory with the release of İbrahim Gökçek.