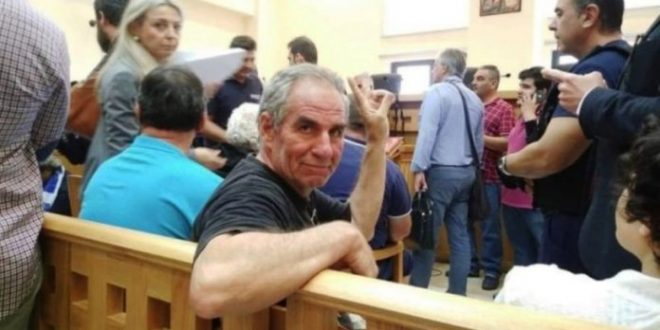 AN ITALIAN CITIZEN WAS BANNED FROM ENTERING TURKEY

Ippazio Antonio Luceri (known as Pati), an Italian citizen, was on February 26th in Istanbul, Turkey, to express his solidarity with the two members of Grup Yorum who have been on hunger strike for more than 250 days. The Turkish fascist border police stopped him at the airport and he was interrogated for several hours.

Pati has always been at the forefront of the fight against fascism, imperialism and the repression of peoples by bourgeois governments against those who oppose it. This is a provocation and an intimidation of all those who think, write, debate how the ruling regime in Turkey today is a fascist regime.

The reason of the Turkish police is that he was ”not a welcome guest”. They kept him all night in a room with his mobile phone blocked, without being able to communicate with anyone.

The people’s lawyers in Turkey promptly called the airport police station for information, which was not provided. In Italy, the democratic lawyers in Rome were also immediately alerted and immediately contacted the Italian Consul in Istanbul. He was not denied an explanation and it was reported that Pati would be repatriated on the first flight to Italy.

What are the real reasons for the immediate return of an Italian citizen?

Treated by the Turkish government as criminals, musicians and singers of Grup Yorum, they have been arrested for “belonging to a terrorist organization”, like most of the Turkish citizens currently in prison, whether they are professors, architects, engineers, workers…

The demands of Gurp Yorum on death fast:

On February 24, Ibrahim Gökçek (bassist of the band Grup Yorum), on hunger strike since May 17, 2019, was released. According to the doctors at the Institute of Forensic Medicine who examined him, his state of health, his physical condition is incompatible with imprisonment. Now, together with Helin Bölek, he is in the Resistance House of Grup Yorum in the district of Küçük Armatlu (Istanbul) and they are continuing their battle. Dozens of people are going to visit them to express their solidarity from all over Turkey, but the government is frightened by all this turnout because the news of the hunger strike is spreading all over the world and many actions and demonstrations of solidarity are taking place everywhere.

The Turkish government is so frightened that since it was forced to release Ibrahim for health reasons, tanks and a large military and police force have surrounded the Resistance House and the Idil Cultural Centre. They are afraid of international solidarity.