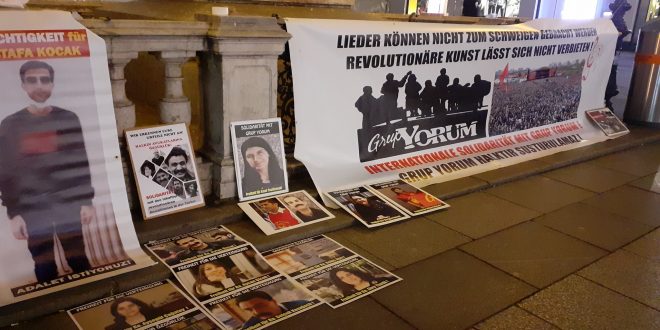 ACTION FOR JUSTICE AND FREEDOM IN VIENNA

SHOW YOUR SOLIDARITY!
February 18, 2020: Another day in the weekly protest in solidarity with death fasting members of Grup Yorum and Mustafa Koçak.
This action in support of the people’s resistance in Turkey continues for already 6 months every Tuesday evening without interruption at the Mariahilfer Street in Austria’s capital Vienna.
International Solidarity with the resistance of Grup Yorum for cultural rights and freedom, with Mustafa Koçak and the people’s lawyers for justice is growing around the world.
The action will continue to guide all people’s resistances as long as required to gain victory!
A great example of international solidarity for the hungerstrikes has recently been shown by dozens organisations and individuals gathered during the “Antiimperialist Front”s international symposium in Greece. Another solidarity came from other dozens of organisations within the “Internationalist Alliance” in Germany.
LETS RAISE AND UNITE OUR VOICES!
Today, the death fast resistance of Mustafa Kocak reached 232 days
Grup Yorum member Helin Bölek is on death fast for 244 days and Ibrahim Gökcek for 247 days…
They suffer from serious health problems already, but the solution can only come from the Turkish government. And to reach such a decision in favor of the hungerstrikers, we need to raise and unite our voices!
MAKE A SHORT SOLIDARITY VIDEO!
Please make a very short simple video with a solidarity message for the resisters and send it back to us. It will be published at various solidarity networks and can be shared by many other friendly groups to get heard on international level..
VISIT TO ISTANBUL!
Recently, another appeal was raised to support the hungerstrikers in the resistance house of Grup Yorum in Armutlu, Istanbul.
Voluntaries are called to visit Helin Bölek and the families of the resisters to show their support and make another effort to push the government for a decision. It is of life importance to gain a very urgent solution.
All demands can be fullfilled by the AKP government easily:
GRUP YORUM DEMANDS:
MUSTAFA KOCAK DEMANDS:
PEOPLE’S LAWYERS ON INDEFINITE HUNGERSTRIKE FOR 17 DAYS:
They demand an independent jurisdiction and also express solidarity with their clients on death fast.
Mustafa was arrested only with the lies and statements made under police torture. The person who signed a false police statement to charge Mustafa withdrew his statement later.
Another person called Berk Ercan collaborated with the police and is responsible for the arbitrary arrest of 300 democratic, oppositional persons, based on his statements. No proof or fact was used for the arrest of these people, including lawyers of CHD, journalists, Grup Yorum members and many others.
Grup Yorum and Mustafa Kocak will win! Resistance for justice will win!
INFOS:
Free Grup Yorum:
https://twitter.com/freegrupyorum
Anadolu Newsblog on Facebook & Twitter:
Grup Yorum’s official account:
https://twitter.com/Grup_YORUM
Grup Yorum Direnisevi (Resistance House)
https://twitter.com/YorumDirenisEvi

Public service workers, dismissed from their jobs under special laws, continue to be a hope ...