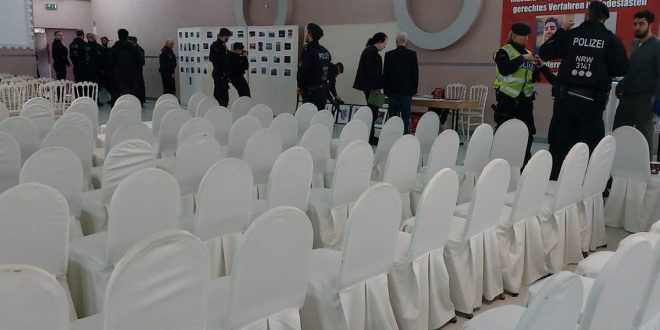 On Sunday, 24 November, was organised Grup Yorum concert, in Cologne, in Alevi cultural centre. The concert was for international solidarity to imprisoned members of the revolutionary group, who are making a hunger strike, inside Turkish prisons , Ali Aracı, Barış Yüksel, İbrahim Gökçek, Bahar Kürt, Helin Bölek, from 17 May. At Friday went police to the center and try to frightened the owners to don’t make the concert in this place. The owners said that the will concede the place to Grup Yorum, because they want that and also that police isn’t allowed it to tell them to whom they will give their centre. By the way there isn’t any law which says Grup Yorum is an illegal music group. Police left and came again on Sunday with a prosecutor, with an official state paper to forbid the concert. They come inside the centre and show the paper to the owner and to Grup Yorum members, which tells that they banned the concert, because Grup Yorum is linked to a Turkish illegal organisation and the German state said that they are terrorists and they can’t make concerts!

At least 30 policemen/women and 8 police vans came before the start of the concert, when we were there to prepare the place. They searched all the centre, took photos, blocked the entrance and the exit for 2 hours. Also they told us if somebody start to play any instrument, they will arrested all of us. Outside of the centre came other comrades, musicians, people who they want to participate the concert and because they can’t they start to gather outside in the street, against this operation. Police tell them that if they want to gather they must make a text to give them to take of police permission for that. A usual tactic of German police. For us who we were inside, they take our IDs and passports and one by one we went out. After they totally blocked the centre.

The imperialist German state, with this operation, shows that it has the same point of view as the Turkish fascist state. One day before police banned and attacked again Grup Yorum concert in Turkey. The imperialist states, like Germany and their collaborators don’t like people to struggle against imperialism, fascism and capitalism. That’s why they don’t like Grup Yorum to sing, because their songs are against the bourgeois state repression, against massacres, against tortures,against imperialism. Because Grup Yorum is the voice of the people, of the workers, of the youth, of the strugglers, of political prisoners, of hunger strikers. That’s why Turkish state attack them so hard for so many years.
We were in Cologne like Antiimperialist Front to give our international solidarity to Grup Yorum, because we believe that international solidarity is the weapon of the people. We give also our solidarity to Mustafa Koçak, who make death fest hunger strike, from 3 July, inside prison.
From Athens to Turkey… from German to Chile and Bolivia…from Syria to Palestine…and all over the world… fighting against Imperialism, fascism and capitalism its not a crime. It’s a duty.