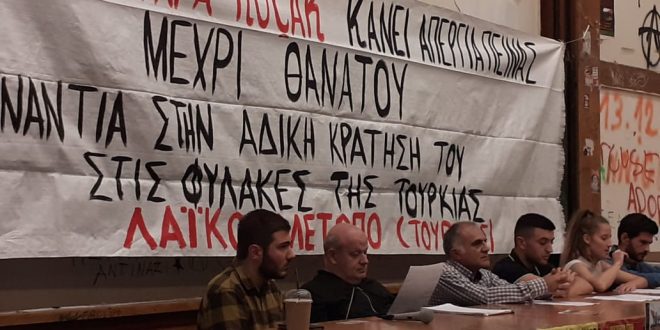 I am speaking on behalf of the Anti-Imperialist Front. I would like to describe its history.

It is not enough to hold symposiums – it is also necessary to organise. So this explains the estblishment of the Anti-Imperialist Front, which works to organise individuals and groups who take part in the symposiums, to oppose imperialism in an organised manner.

And this is important. Imperialism is at work in the world. Sometimes it tries to overthrow governments that do not follow orders from imperialism, such as Venezuela. An attempt earlier this year failed. However, a more recent attempt in Bolivia has succeeded in making President Morales resign. You can see the “internationalism” of imperialism, because the new government immediately recognised the puppet of imperialism in Venezuela Guaido as one of its first acts, no doubt under US influence behind the scenes. Those who are against imperialist aggression like the Anti-Imperialist Front are going to have to be as internationalist as the imperialists are.

Another example of imperialism is of course Greece. We are here on the anniversary of the heroic Polytechnic Resistance of 1973. Greece was under a military fascist dictatorship, introduced because of American imperialist pressure. The heroic resistance helped to end the open dictatorship. But Greece is still, as a bourgeois democracy, part of imperialist institutions such as NATO.

The Anti-Imperialist Front’s activities are still at a modest stage. We have brought together activists and organisations from a number of different countries, so far predominantly European. More people are involved from southern Europe – Turkey, Greece, Italy Spain, than elsewhere. We do seek to build links elsewhere, especially in the Middle East and Latin America.

The next AIF symposium will be held here in Athens in the middle of February, specifically the 14th, 15th and 16th of February. You are all welcome to attend. Thank you very much.