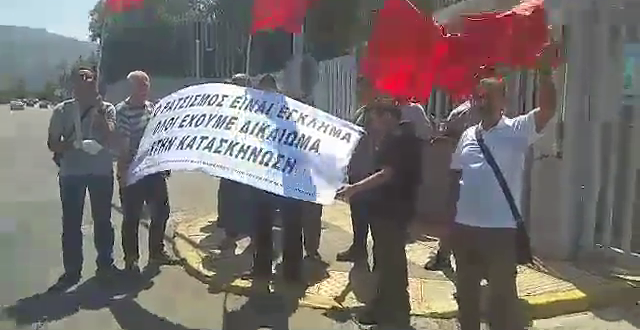 Members of the People’s Front in Greece were detained with torture by police who said they had received instructions from the Ministry of Public Regulation when they were camping in Halkida on 22 August. Our friends were tortured in the detention vehicle and in the police station.

We as the People’s Front in Greece read out a press release in front of the Ministry of Public Regulation on Monday, August 26 at 13.00.

In the action, “The Only Enemy is Imperialism” “Revolutionaries Are Not Terrorists, The Terrorist Is Imperialism” were shouted in Greek. Approximately 15 people participated in the action, which ended after the press release was read.
Camping is our most legal right, the attacks and repression are the reason we are revolutionary. It is a crime and there is no legal basis for the arbitrary attempts of the Ministry of Public Regulation to prevent us from camping. The Greek state in implementing the policy of US imperialism and fascism and is trying to prove itself to the state in Turkey. The state of Greece commits a crime before history by attacking revolutionaries and torturing them.

Down with Fascism, Long Live Our struggle!

Revolutionism Is Not a Crime