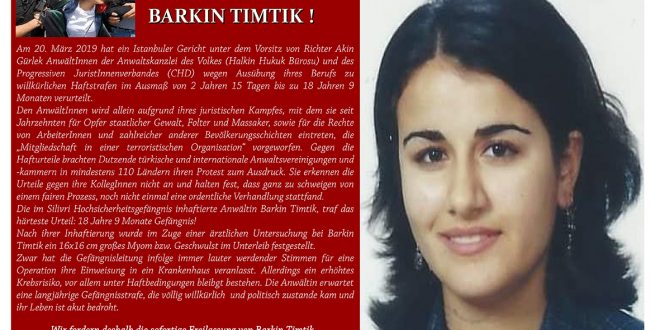 On the 20th March 2019 a court in Istanbul under the presidency of judge Akin Gürlek arbitrarily condemned lawyers of the People’s Law Office (Halkin Hukuk Bürosu) and the Progressive Association of Jurists (CHD) to prison sentences from 2 years 15 days up to 18 years 9 months, only because they carried out their profession.

The lawyers are accused of „membership in a terrorist organisation“, just because they legally fought state violence, torture and massacres, and because they defended the rights of workers, political opposition members and many other oppressed sections of the people.

Several lawyers unions and bar associations in Turkey and thoughout the world (in at least 110 countries) protested these sentences. They don’t recognize the sentences against their colleagues and stressed, that not to mention a fair trial, there didn’t even take place an orderly hearing.

After her imprisonment, a kind of miom with the size of 16×16 centimeters was established in her lower abdomen. After people started to demand a proper examination and her freedom, Barkin Timtik was sent to hospital for surgery, but as long as she remains under prison conditions, there’s high risk for cancer.

Lawyer Barkin Timtik was arbitrarily condemned to a very high prison sentence, simply for political reasons. That’s why her life and health is in great danger.

We demand the immediate release of Barkin Timtik in order to grant her necessary therapy and treatment by a doctor of ther choice! 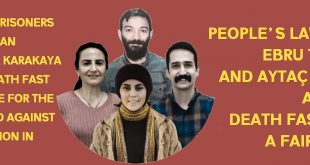