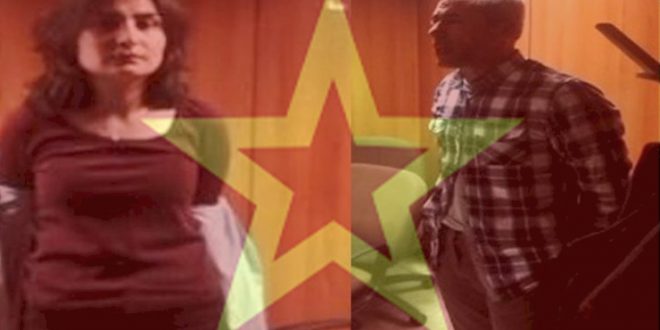 THIS IS HOW THE FRONT ENTERS THE ASSEMBLY

WE ENTERED INTO YOUR MINDS

WE TOOK YOUR COMPREHENSION

THIS WAS OUR GOAL AND WE SUCCEED

2 WARRIORS OF THE FRONT, WHILE ENTERING THE TURKISH NATIONAL ASSEMBLY ON THE DATE OF MAY 14TH 2019, TOOK HOSTAGE A POLICE OFFICER PERTAINING TO THE ASSEMBLY SECURITY.
ONE POLICEMAN WAS WOUNDED AND HIS INJURY HAD FIVE STITCHES.

The Parliament IS STABLE OF THE BOURGEOISIE ,
BUREAUCRACY’S TREE, say so the teachers of our revolution.

YOU SHALL NOT SIT IDLE IN THAT STABLE.

YOU SHALL NOT DRINK THE BLOOD OF THE BRAVEST CHILDREN OF THE PEOPLE IN THAT STABLE.

We will bury YOU in your own filth in that stable.

In your news you say: “Two members of DHKP-C were caught when trying to enter the Assembly…”.
What does this mean? You did not know what to say out of your fear. You are helpless and miserable ever since you broadcasted a penguin film in order to neutralise the June Uprising.

You were not able to make a statement about the action even within seven (7) hours.

Did you think for seven hours and come up with this lie?
Let us explain what “Two members of DHKP-C were caught when trying to enter the Assembly… ” means.

TWO WARRIORS OF THE FRONT (DHKC) ENTERED THE ASSEMBLY, took hostage a security officer and said: “We want justice!”

They said: WE WANT JUSTICE FOR BERKIN, FOR ROBOSKI.*

You massacred 34 brave sons of our Kurdish people, 24 of whom belonged to the same family (Roboski massacre).
Such a pain you caused to a family, to a single family. We want their murderers, we want those who gave the orders.

We want those who fired and those that gave the orders to fire in Roboski.

We demand justice for Berkin ELVAN for five entire years.

We want those that shot at Berkin and those that gave the orders to shoot.

We will get them.

YOU CANNOT HIDE THE FACTS.
EVEN IF YOU TAKE ALL THE PRESS AND TVs UNDER CONTROL, YOU STILL WILL NOT BE ABLE TO HIDE THEM.

BECAUSE WHILE EVERYONE IS SILENT, THE FRONT SPEAKS AND SHALL SPEAK

YOU CAN SUBDUE EVERYONE

YOU CAN SILENCE EVERYONE

BUT YOU WILL NEVER SILENCE THE FRONT.

YOU WILL FIND US ALWAYS IN THE PLACES WHERE YOU FEEL SAFE.

– WE WILL BE THE RAZOR

– WE WILL BE THE PENCIL

– WE WILL BE YOUR NIGHTMARE

BELIEVE US, ULTIMATELY WE WILL BE YOUR END.

WE WILL BURY YOU IN THE HISTORY.

AS OF NOW, EVERY PENCIL YOU SEE WILL REMIND YOU OF US.

UPON SEEING EVERY RAZOR IT WILL REMIND YOU OF US.

WE WILL NEVER FORGET OUR MURDERERS
YOU DO NOT FORGET US EITHER.

Our action was successful.

You can strive to make it seem weaker all you want
.
We entered into your Assembly
with a razor.

We entered with a pencil.

We took a hostage
.
We announced our demands
.
We wounded a police.

We did what we planned to do.

WE WANT JUSTICE AND WE WILL HAVE IT!

THE GOAL WAS NOT TO KILL, HOW FAR DOES THE KILLING GO, NO IT IS NOT OUR GOAL.
OUR GOAL WAS TO DEMONSTRATE WHERE WE CAN ENTER AND WHAT WE ARE ABLE TO TO.
WE ARE THE PEOPLE.
YOU WILL NOT FORGET THAT!

WAR IS THE WAR OF WILL, THE WAR IS A CLASH OF DETERMINATION, THE WAR IS IMPOSE ONE’S WILL TO ANOTHER.
WE DID IMPOSE OUR WILL. WE ENTERED THE PLACE WE WANTED WHEN WE WANTED AND WE SAID THIS IS OUR WILL.
WE ENTERED AND YOU SHALL ACCEPT OUR SUPERIORITY.

BECAUSE WE ARE THE ONES THAT ARE RIGHT. THE POWERFUL ONE IS THE PEOPLE, NOT YOU.

THE POWER GIVEN BY THE RIGHTFULNESS IS OURS.
CREATIVITY: WHERE THE LABOUR AND THE WILL UNITE THE IMPOSSIBLE IS MADE.

A SHORT NOTE TO SÜLEYMAN SOYLU**: YOU SAID “DHKP-Cs LEADERS ARE EITHER IN THE PRISON OR AT THE CEMETERY” AND AGAIN YOU COULDN’T KNOW…
YOU HAVE FLUNKED LAZY SÜLEYMAN. LOOK, WE ENTERED THROUGH YOUR DOOR. WE ARE NOT AN ORGANISATION OF A FEW LEADERS, WE ARE THE PEOPLE.
IN ORDER TO DO PUT AN END TO US, IT WOULD BE NECESSARY TO PUT THE WHOLE PEOPLE IN THE PRISON, TO BURY IT A THE CEMETERY.

A SHORT NOTE TO THE TAYYIP’S PUPPET JUDGES AND PERSECUTORS: DO NOT BE TAYYIP’S SIGNATURE MACHINES; THOSE THAT CANNOT PROTECT THEIR OWN STABLES WILL NOT PROTECT YOURSELVES.
WE WILL WIN THE POLITICAL POWER VIA OUR CLAMS AND COURAGE. IN YOUR ASSEMBLIES, HOUSES, VILLAS, SKYSCRAPERS, ROADS, DAYS AND NIGHTS, IN YOUR DREAMS, WE SHALL BE AS CLOSE TO YOU AS MUCH AS A VOICE AND A BREATH CAN BE. BECAUSE WE ARE THE PEOPLE.

TODAY WE ENTERED THE DOORS OF YOUR STABLE, AND YOU SHALL NEVER KNOW WHERE WE WILL ENTER TOMORROW.
LIVE AND SEE.

WAIT FOR US, WE WILL COME AGAIN!

*Berkin Elvan was 15 years old teenager, killed by the police of a targeted shot with gas cartouche.
In Roboski (SirnakUludere) turkish army killed 34 farmers during passing the border of Irak because the possibly could be members of the PKK).
** Süleyman Soylu, Minister for Internal Affairs