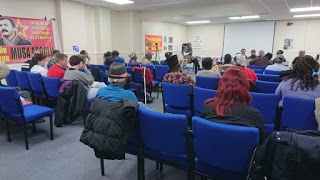 On Friday, April 26, Anti-Imperialist Front participated as speakers in the seminar organized by the Freedom Committee for Abu-Jamal.

It began with a minute of silence for all revolutionary prisoners and martyrs. Speakers from Peru, Ireland and the Committee for the Freedom of Mumia Abu-Jamal talked about their struggles in their own countries.

The Mumia campaign described Abu-Jamal’s unlawful arrest and the sentencing of him to life imprisonment, and the committee’s campaign for his freedom.

Anti-Imperialist Front (AIF) talked about the history of the prison massacres in Turkey and Kurdistan. The attacks of AKP fascism on all sections of the people and the struggle of the peoples was also explained.

In particular, the European prisoners, including Musa Asoğlu (who US imperialism put a bounty on his head of $3 million) and Erdal Gökoğlu were talked about, and a call for support was made.

At the end of the meeting, the AIF proposed to organize correspondence between international prisoners. In the meeting, the banner of Musa Asoğlu in English and Turkish were put up, and the meeting continued with a question-answer session.