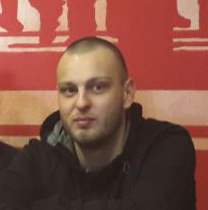 A meeting of the Anti-Imperialist Front took place in Berlin, Germany on February 23-24. We spoke to Stefan Petrov from Bulgaria’s September 23 Movement who took part in the meeting.

Yürüyüş – Hello Stefan, we want to talk to you about the Anti-Imperialist Front meeting. You were one of those at the February 23-24 meeting. Could you give some information about it?

Stefan Petrov – The Anti-Imperialist Front meeting took place in Berlin. Several representatives of organisations from a number of countries attended the meeting. The meeting saw intense debate on current international issues and how we can resist imperialism at the international level. The participants shared their observations and opinions from the struggleagainst imperialist aggression in different countries. In order to improve the work of the Anti-Imperialist Front, we discussed the issue of organisation, and talked about improving our communication and relations.

Yürüyüş – You represented the September 23 Movement. Could you briefly say something about your organisation?

Stefan P. – The September 23 Movement is a Marxist-Leninist organization. We are working to develop and spread communist ideology in Bulgaria and to raise the flag of struggle against imperialism in our country. In the past years; We organised or participated in various actions and activities against the aggression in Iraq, Syria, Venezuela and Donbass against the Israeli genocide against Palestinians, against the isolation and sanctions imposed on Cuba and the Democratic People’s Republic of Korea. Last summer, we organised with friends of Grup Yorum a concert for ‘Freedom For Grup Yorum’ in Bulgaria. Following the restoration of capitalism in Bulgaria, we are trying to create cadres that will form a great revolutionary organisation that will take on the struggle for a more just socio-economic order. Another priority of our organisation is to develop theoretical and ideological activities. For example, we are dealing with the causes of the defeat of socialism in our country.

Yürüyüş – How does your organisation view the Anti-Imperialist Front?

Stefan P. – From the creation of the Anti-Imperialist Front to the present, our organisation is a part of it. For us, the creation of an international organisation that will resist imperialist aggression is of great importance. We want to take an active part in the struggle against imperialism and we believe that this will only develop on the basis of international solidarity. For this we will continue to take part in the development of the anti-imperialist struggle in Bulgaria and actively participate in the development and activities of the Anti-imperialist Front.

Yürüyüş – Besides discussions at the meeting what other activities were there?

Stefan P. – Despite the intensity of the anti-imperialist Front meeting program, we had the opportunity to visit interesting places in Berlin as participants. It was undisputed that the monument park of the Soviet army, which saved us most of all from the oppression of Hitler fascism, affected us. The size and beauty of this place fascinates everyone. What attracts our attention is that the entire complex is preserved and maintained. The monument to the Soviet army in Bulgaria is often subjected to vandalism by the anti-communists. We had the chance to see the monument of Mark and Engels in Berlin. We were even able to take photos under the watchful eye of the local police, who showed special interest in us.

Yürüyüş – At the meeting what decisions were taken about the future?

Stefan P. – We have addressed many international current issues at the meeting. As all participants, we condemned aggression against the president, Maduro, and his government in Venezuela. Turkish and Ukrainian comrades shared the information about the application of fascism in their own country, they spoke of their struggle. We talked about the situation in the Near East.

At the meeting, we decided to organise campaigns for AIF participants on the 70th anniversary of NATO’s establishment in their own countries. We have found that the presence of US and NATO military bases in our countries is a current problem. We make decisions about revolutionary solidarity with lawyers in Turkey who are in prison, and in solıdarity with Musa Aşoğlu. While we were in Berlin we organised a solidarity action with the revolutionary Ayten Öztürk, who was kidnapped and tortured for six months by contra-guerrillas who abducted her from Lebanon to Turkey – we protested in front of the Lebanese consulate.

We have decided to publish a regular magazine among the main tasks of AIF. Our journal will include analysis of current issues within the framework of anti-imperialist struggle.

Yürüyüş – Thank you for setting aside time for us. Do you have a message for our readers?

Stefan P. – I look to readers of Yürüyüş to have a better future. Because they will. I know that your magazine has been subjected to terrible state oppression in recent years and despite this, the publication manages to maintain its life and illuminates its readers with the light of truth. Yürüyüş is the flag of righteousness, which no ban can stop.