BIGtheme.net http://bigtheme.net/ecommerce/opencart OpenCart Templates
Home » Anti-Imperialist Front » In Colombia, there is submission instead of peace, There is hegemony of drug traffickers and paramilitaries instead of tranquility 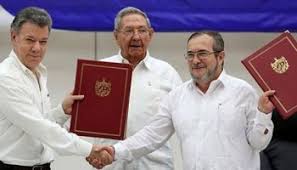 In Colombia, there is submission instead of peace, There is hegemony of drug traffickers and paramilitaries instead of tranquility

The head of FARC, who left Colombian people unarmed in the face of imperialism in exchange for the chairs in the Parliament will lose the chairs too!

In the period of formal and final FARC disarmament from 2016 to nowadays, all the Colombian people saw the truth, there won’t be peace with the imperialism and the comprador bourgeoisie. The only way is resistance and winning.

FARC was known by being a socialist armed organization that is fighting for landless and poor peasants from 1964, until 2016 when it finally left the arms after the period of leaflet bomb of peace and reconciliation.

After all, disarmament of FARC guerrillas was announced to whole world with white doves, like a huge victory in 2016. But the balance of the “victory spectacle” was very hard for Colombian people: in this 52 years in war, 600.000 people died in conflicts, 79.000 people disappeared and 173.000 people was killed by the paramilitary forces organized by the state. 7 millions of peasants have to left houses, villages and there was more than 10.000 political prisoners in Colombia…

In spite of all the loses and attritions, the leaders of FARC turned away from poor people towards the murderers with the objective to withdraw from the armed struggle. For having a few seats in the assembly they left the arms, which are the hope of landless peasants, to the UN and they let the guerrillas to return civil life…

Peace is Over, Time of Massacre

The spring of peace for the years of 2016 and 2017 turned into a bloodbath in just 2 years. When the guerrillas left the mountains of Colombia, that void was filled by the paramilitary and formal forces of the fascist Colombia government, and the massacres against the local people has risen rapidly… The heads of trade unions and the guerrillas who turned to civil life became the unprotected targets and lots of them were killed in 2 years after the peace. Little girls and boys are forced into the prostitution and drug selling. The people are faced with the fascists state forces and became open targets for massacres. The agricultural lands were shared by the monopolies which are the most important part of the commitments of the peace.

According to the report prepared by the Defense Office, in the first stage – 2016 to 2018, 419 well-known human right activists were killed; In the first two months of 2019 29 people were killed also. More than 90 members of FARC who turned on civil life are inside the sacrifices.

Which outcome is harder?

The result of quiet resistance against the fascist Colombian state is harder than before for the landless and poor peasants. The land which they fought for, for years is sold to the monopolies for, the mountains protected by the guerrillas became the shelter for the drug mafia now. The young women and man who lived in dignity, have no choice other than prostitution and drugs.

What is lost from the peace with the enemy, is more than just the war of resistance. FARC manipulated the minds of people with lies in order to have a place in the assembly and opened a way to the massacres of the Colombian people. The events of the last 3 years were more difficult than last 50 years of war.

As we said at the time of the first negotiations, there is no way to resist against the enemy that is fully armed. Pacification and disarmament are not the real peace, it is just opening the way to bigger massacres of the people.

People in Palestine were resisting for decades with the little children commandant, women, men, youth and the old… Every new day, they make new simple tools and methods of resistance against one of the most powerful armies in the world. Palestinian resisters use the stones and their bodies, but they never give up.

There are revolutionaries in Turkey, they are still resisting in the mountains, cities, villages and the poor districts… Even if they are burned in the prisons they still continue to resist and fight.

However, the Colombian people has not withdrawn from the battle. They should look into their own history for the resisting people and they will see the real heroes in there… They will see the real leaders of people in the fight of Simon Bolivar, Zapata, Lenin, Uncle Ho, Mao and Che…

Colombian people will see the only solution for their land is in the fighting and winning within the struggle of Alfonso Cano and Raul Reyes.

We don’t accept the massacres imposed of the Colombian people with the lies of peace.

We, as Anti-Imperialist Front will continue our solidarity acts with the Colombian people…