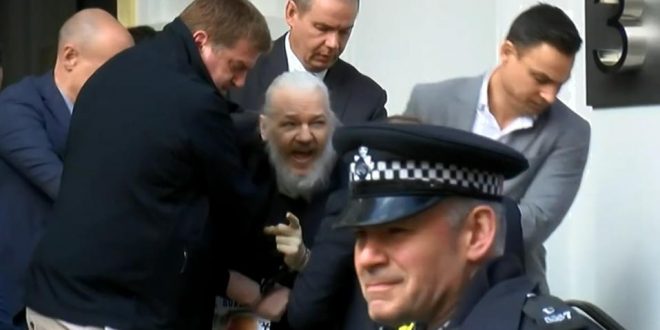 Imperialism attacked Assange to cover up its own filth

Julian Assange, as the founder of the Internet portal Wikileaks, published the internal correspondence of leaks from the US security system and placed all the filth of imperialism in front of the people. Sharing the Wikileaks documents, Assange stayed in the Ecuadorian embassy in London for seven years against the threat of detention, and this was also on the agenda again with the recent evidence coming to light of US war crimes in Afghanistan and Iraq. However, as a result of the change in government in Ecuador and the policies of the USA in Latin America, the Ecuadorian government presided by Lenin Moreno handed over Julian Assange to the British government and showed its determination to enslave itself to the United States.

With the Wikileaks documents, the USA’s exploitation policies towards the world’s peoples, the conditions of the collaborationist governments, seized documents, money laundered, and all kinds of indecency were revealed, and the true face of the USA was clearly manifest. This is the reason why Assange was taken into custody through the cooperation of three countries and all the international conventions were trampled upon in doing so.

The operation to arrest Julian Assange and ultimately hand him over to the United States is also a clear indication of the intolerance of imperialism and how it has organised an attack on the peoples. In the face of Assange uncovering the facts, imperialism was desperate, it could not overcome him for seven years, and unable to tolerate this it violated all international rules.

The attack on Julian Assange was also an attack on all political asylum seekers. In countries where there is no political right for anyone who stands up to imperialism, the right to life is not safe. Assange was arrested by a joint operation of two imperialist and collaborating powers and the USA will continue to prosecute him with a request for extradition.

Imperialism attacked Assange to cover up its own filth. However, Assange is not alone, against the intolerance and aggression of imperialism we stand by Assange as the AIF, and we know that the peoples of the world who are oppressed will not leave him unsupported!
Imperialism cannot judge Assange!
Imperialism will be defeated, the peoples that resist will win!