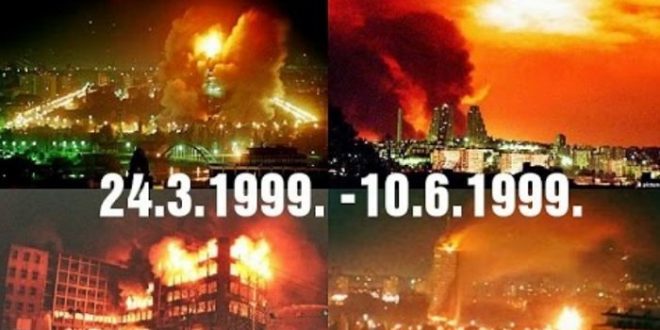 20th Anniversary of the NATO bombing of Yugoslavia

20 years ago, on March 24th 1999., without declaring war and acting against against the UN Charter, 19 members of NATO started bombing a sovereign country–Yugoslavia. This aggression became a model for the future imperialist interventions but did the revolutionary movement learn their lesson?

From the very beginning, this war was atypical: it started with blatant disregard for United Nations, it’s real cause never reached the public opinion, it’s main battlefield was the field of public relations and the role of the social-democracy together with left-wing intellectuals was of decisive effect in the demobilisation of every action against the war.

During the 78 days of war, 2500 civilians, out of which 89 were children, lost their lives. However, the statistics do not have a human face. Digits have no hope, smile nor fear. Being impersonal the numbers have dehumanising effect. In fact, NATO’s propaganda machine avoids mentioning even the numbers. It’s propaganda discourse is so cynical that it tags as “collateral damage” even the Albanian civilian victims of the bombing. It talks about the human victims as if they were worthless objects, and the public opinion accepted it without objection.

In Đakovica, 64 Albanians who abandoned their homes to avoid the bombings were killed, and in the village of Koriša 87 Albanian refugees. If we compare only those two massacres that NATO committed with the Račak Massacre, we get to understand the real proportion of the imperialism’s cynicism. According to NATO, 45 Albanian civilians were killed in the Račak Massacre which played a key role in the preparation of the Western public opinion for the war.
19 members of NATO which defend the civilisations, democracy and the freedom of press committed a number of barbaric crimes against the humanity in Yugoslavia, apart the ones against the Albanian refugees: in bombing of the state television station it killed 16 of it’s workers, in the attack on the Lužani bridge a rocket hit a passenger bus and carbonised 40 of it’s passengers, the town of Surdulica and it’s surroundings were bombed on three occasions in which 50 citizens were killed and 3/4 of it’s infrastructure was destroyed, in the city of Niš the prohibited cluster bombs killed 16 civilians, in Grdelica a passenger train was hit killing 50 civilians, in the city of Aleksinac which has no military objects 17 persons were killed and nearly 700 buildings destroyed, in Novi Pazar 11 persons were killed among which was a two yearold who died in his fathers embrace, in the Varvarin bridge attack 10 people were killed, in the attack on the embassy of the Republic of China in Belgrade 3 Chinese diplomats were killed…

Apart from the bombing, due to the use of depleted uranium the NATO bombing caused the increase of the incidence of cancer among the Yugoslav population. Currently, Serbia has the highest level of cancer-related mortality in Europe.

Under what pretence did NATO commit this war crime? According to the imperialist mainstream media, the military intervention was necessary because the Yugoslav delegation rejected the peace agreement with Kosovo Albanians. Does it mean that the Yugoslav delegation rejected the expanded autonomy of Kosovo as stipulated by the Rambouillet Accords? No. The Yugoslav delegation accepted all provisions related to the Kosovo Albanians and it’s parliament ratified them. However, apart from the expanded autonomy of Kosovo the Rambouillet Accords contained NATO’s military provisions which demanded free access to Yugoslav land, air space and diplomatic immunity. Yugoslavia was bombed because it rejected to surrender it’s independence and sovereignty as it is guaranteed by the international law.

The consequences of this intervention extend to this day. Right after the intervention, second biggest US military base was established in Kosovo: Camp Bondsteel. Although against the international law, Kosovo’s unilateral proclamation of independence was recognised and became the model for future imperialist projects. After the Kosovo War, the Kurdish nationalist movement invited imperialists to apply the Kosovo solution to the Kurdish question. In order to achieve it’s geostrategic goals, the imperialists used the experience gained in the Kosovo scenario and applied it to Afghanistan, Iraq, Libya and Syria.

Aside from the black propaganda and bombing, the ones that provided the imperialists with the victory in Kosovo was the so called left, progressive and a part of the revolutionary movement. While the left-wing intellectuals that wanted to please the imperialists by legitimising and pink-washing the war, the self-proclaimed “revolutionary” “anti-imperialist” organisations neutralised any kind of international solidarity against the war by equalising the victim and the aggressor. Nothing has changed even 20 years later.

What are the lessons the revolutionary movement can learn from the Kosovo War? 1. The imperialism cannot bring the peace. Instead of peace, it creates a perpetual state of conflict. 2. There is only one way to put a stop to the imperialist interventions: internationalist solidarity.
During the Kosovo War, the Turkish revolutionary movement was an example for the solidarity with the people of Yugoslavia. Two warriors, Selçuk Akgün and Sadık Mamati, one Kurd and one Laz, had fallen martyrs in a protest action against the US consular department. Their only enemy is the oppressor, the imperialism. Their friends and comrades are all the oppressed people. While the people of Yugoslavia resisted the imperialist aggression in 1999, they felt that resistance in their hearts and did not remain silent.