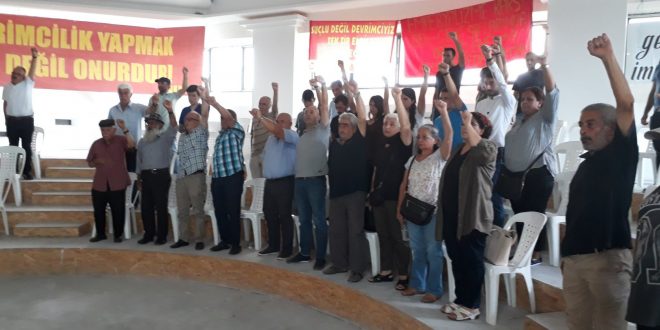 Greetings our comrades that wave the flag of the anti-imperialism from all corners of the world!

Greetings to all people of the world that are oppressed, exploited, forced to immigrate and massacred!

Greetings to revolutionary and patriotic political prisoners who resist for the sake of defending their values and ideas in the imperialist and fascist prisons!

Greetings to the popular governments that resist against the imperialism which tries to seize them with threats, embargo and conspiracies!

Let there be salute for you, the martyrs of the world who died for socialism undefeated!

We salute you from the capitol of the struggle, Istanbul.

Among us are also our leaders Mahir Çayan and Dursun Karataş. Within us is our comrade Eyüp Baş. We are without them, yet we are with them.

On the 9th International Symposium of People’s Unity against the Imperialist Aggression that we organised, with our consciouses we the strength in our hearts that we got from you…

This year, unlike the previous Symposiums, we will share our resistance with you as the inspiration of hope for the people of the world.

We want to extend the resistance for justice, against the fascism and imperialism, for growing hope on every inch of the world’s soil.

And we also know that this resistance will grow, it will be transformed into powerful strikes upon imperialism and fascism…

The imperialism is experiencing one of the deepest crisis in the history. The aggression towards the people of the world would be as big as it is the fight for the market among the imperialists.

Every year, 1 billion people gets up from the bed being hungry. Every year 10 million people, that 1 human every 4 seconds, dies of hunger.

In 2017, 68.5 million people across the globe, that is 1 in every 100 humans, emigrated from his homeland. As a consequence of imperialist wars, millions of people lost their lives.

At the same time the attacks of the US imperialism continue being aimed towards the governments which oppose it’s interests. The most concrete example of this is still being experienced in Syria. Independent Syria which didn’t have a single imperialist base was occupied by the hand of the bandits that were raised by the imperialism. However, with the resistance of the people and the army of Syria against the bandits and occupiers, the big part of the country has been liberated again.

The imperialist offensives are not limited just to the Syrian state. The bombs of US collaborator Saudi Arabia’s rain over Yemen every day. Every day the people of Yemen are being killed.

US wants to submit Iran via sanctions.

US imperialism continues trying to topple Venezuela that does not bow to it’s desires.

The leader of the progressive government established in Donbass, Aleksandr Zaharchenko was assassinated last week by the imperialism and it’s fascist collaborator the Ukrainian state.

Cuba, Nicaragua, Bolivia and chiefly DPRK are the main targets of the imperialist aggression.

On the other hand, the Zionist occupier responds to the legitimate resistance of the Palestinian people with bullets and rockets. Almost every day a Palestinian is being killed.

As progressive, revolutionary, Marxist-Leninist, socialist, that is, anti-imperialist, anti-fascist forces, we will be a barricade against all of these imperialist attacks.

“Resistance”, that is the name of this barricade!

We will bring forth resistances as a foundation of this Symposium.

In our country Yüksel resistance is nearly 2 years old. It continues with the same determination.

In order to return to the jobs they were expelled from by government decree, academician Nuriye Gülmen and teacher Semih Özakça started their resistance in November 2016. Tens of times arrested and imprisoned, they were on hunger strike for 324 days. The spark they ignited became a fire in Yüksel street that continues illuminating the path of the labourers. The resistance continues every day, two times per day at the cost of arrests and torture…

In Düzce, the architect Alev Şahin resists since January 2017 in order to get back to the work she was laid off from by government decree.

After being laid off from his work at the Izmir municipality, Mahir Kılıç was on hunger strike for 184 days and won. However, Karşıyaka the CHP representative of Izmir municipality did not keep his word and did not reinstante Mahir Kılıç back. Upon this Mahir Kılıç took his protest in front of the CHP’s central building. He continues resisting every day…

Teachers Nursel Tanrıverdi and Selvi Polat who were laid off via government decree were forbidden by a court decision from approaching Istanbul’s Bakırköy square in 200 meter radius because they protested there saying “We want our jobs back”. They did not bow to this ban and continues with their protests. Because of this they were imprisoned. They were released two days ago, after 16 day imprisonment.

79 yearold Kezban Bektaş claims her beliefs and values, and resist for her imprisoned daughter. She exposes the immoral police that raided the cemevi (Alevi house of prayer) in the broad daylight, and urinated in the middle of it. She does sit-in protest every day in the cemevi’s garden.

In order to be able to get back to the jobs they were thrown out from in 2010, Türkan Albayrak set up a tent in front of her working place, started one man resistance and won. Tkan Albayrak was laid off from her work once again on the grounds of security investigation. Once again she said: “resistance.”

Grup Yorum, a 33 yearold music group’s 10 members are imprisoned, another 6 members are on the most wanted list with prize on their heads. However, it responds to the fascist black lists and imprisonments with songs and concerts…

People’s lawyers… 19 of them are imprisoned, but they continue practicing their revolutionary profession from inside the prison. They resisted against the imposition on SEGBIS (video conferencing system in Turkish courts) which impeded face to face participation in the trial. They started a hunger strike and won over the SEGBIS imposition. We will be in the hearing salon on September 10th for our lawyers.

Free prisoners do not submit their will to the fascism for two years while saying: “Continuous resistance against the continuous fascism.” Isolation cells, communication andvisitation punishments cannot indimidate them…

We saw how low can the imperialism and fascism get, as our comrade Ayten Öztürk was kidnapped by the state of Libanon and delivered to the Turkish fascism. There is no sort of torture that Turkish counter-guerrilla did not apply on her for over 6 months. On the other hand Ayten Öztürk singlehandedly resisted 6 months of torture…

It is the time to grow the struggle and all kinds of resistance against the fascism and the imperialism. We call upon all friendly institutions to partner with the struggle of the Anti-Imperialist Front.

We, those who resist, will be those that are winning the victory against the fascism and imperialism

for our believes, our values,
for our work, our bread,
for justice,
for freedom,
we resist for our right to resist…

is the light at the end of the tunnel of the fascist darkness,
it’s hope,
it’s faith,
it’s a declaration of our invincibility and insubmission,
it’s a strike against the fascism, imperialism.
To grow the resistance it to grow these.

With the heat of the fire of our resistance, we wish you a welcome to the Symposium!