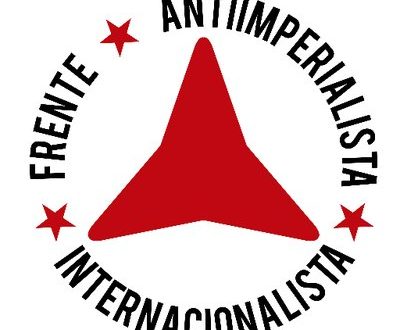 Anti-Imperialist Internationalist Front (Frente Antiimperialista Internacionalista, FAI) salutes 9th “Eyup Baş” Symposium of Popular Unity Against the Imperialist Aggression, all the participants of the Anti-Imperialist Front (Anti-Emperyalist Cephe, AEC) that drive the struggle of the people against the imperialism year after year, and People’s Front (Halk Cephesi, HC) as the host that made the Symposium possible in spite of the harsh political repression.

We are at a historical turning-point: the globalisation as a policy of the neoliberal world order is collapsing; the imperialist system is in a constant crisis while being unable to find a solution for it’s internal contradictions; as the crisis deepens, the imperialist countries are becoming more and more aggressive causing war, destruction and death; the monopolies intensify the exploitation, increase the impoverishment, deprive workers of their rights and nature of it’s sustainability.

The necessity of consolidating the anti-imperialist struggle on the world-wide scale is the imperative of our times in order to respond to the ideological, economic and armed aggressions of the imperialism. We are convinced that the only way to win this struggle is through internationalism, solidarity and mutual support between the people waging struggle.

The Symposium is an important step in achieving those goals, and FAI looks forward to give it’s contribution to their achievement.

FAI has been constituted on December 2nd 2017 as a joint initiative of the Forum Against the Imperialist War and NATO and various organisations engaged in the international solidarity and struggle against the imperialism. Our objectives, much like the objectives of AEC, aim at forming a wide front on the national level of individuals and organisations with unity of action and thought against the imperialist domination.

In our brief period of activity we have organised in the acts of solidarity and support with the victims of the imperialist interventions such as Palestine, Nicaragua, Venezuela and Syria. We resist against NATO bases on the territory of Spanish state, and we demand Spain’s withdrawal from this alliance.

One of our principal activities is the Permanent People’s Tribunal Against the Imperialist War and NATO, where we publicly expose and denounce imperialist crimes, it’s methods of ideological, economic and cultural domination, with the special focus on the Spanish role in it. Our next Tribunal will be held in October, in Cadiz and we welcome any contribution.

In regards to the current situation in Turkey, FAI also denounces the policy of repression against the AEC and HC activists which has the objective to prevent the consolidation of the popular forces in the anti-imperialist struggle in Turkey and in the region.

We hope to extend the collaboration with AEC and it’s participants, as well as all internationalist organisations in the world which fight for our common cause.