WE ARE ON THE SIDE OF THE RESISTING PALESTINIAN PEOPLE!

Killer Zionist Israel is attacking the Palestinian people every day in the West Bank and Gaza. On July 20th, they once more intensified these attacks. Gaza was bombed by airplanes and shelled by tanks and four Palestinians were murdered on the excuse that Israeli soldiers had been fired on at the border. In the bombing 120 Palestinians were also wounded.

The attacks by murderous Israel attacks in Palestine now transcend massacres. In the “Great Return March” actions that have been going on since March 30, 140 Palestinians have been killed and thousands injured in Gaza. On May 14, the Nakba’s 70th anniversary, a total of 63 Palestinians were killed. The Israeli parliament or Knesset, the enemies of the people and devoid of humanity, say that “Israel has as many bullets as everybody else.” They say they will continue to kill the Palestinian people. They officially are trying to kill the Palestinian people to seize all their lands.

Zionism even ignores the laws of the supine imperialists as well as UN resolutions.

They blockade Gaza. The Israeli parliament closed Kerem Shalom, the only border gate outside of Gaza. They say that food or humanitarian aid cannot be received.

They apply the apartheid system against Palestine that was once used in South Africa. In the Knesset, they are promulgating the “Jewish Nation State Draft Law”, which regards the entire Palestinian territory as the “Jewish homeland”.

They are deepening their occupation day by day as if they had not occupied enough of the places where the Palestinian people live. The Israeli government has decided to build more than 500 new homes in the West Bank in the past month. They intend to build Jewish settlement cities on the blood and bodies of the Palestinian people.

The Palestinian people continue to fight. From the age of 7 to the age of 70, all the people, from pregnant women to the disabled, refuse to surrender to the Zionist occupiers. They fight on even at the cost of death. They will continue to fight the imperialists and the Zionists until they expel them from Palestine. Because Palestine, which has been trampled by enemy combat boots for 70 years, is their home, their homeland.

Imperialism Will Be Defeated, The Peoples That Resist Will Win!

Down With Zionism, Long Live The Honourable Resistance of the Palestinian People!

Killer Israel, Get out of Palestine! 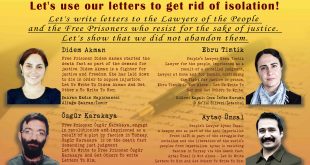 Let’s write letters to the resisters! Let’s use our letters to get rid of isolation! ...