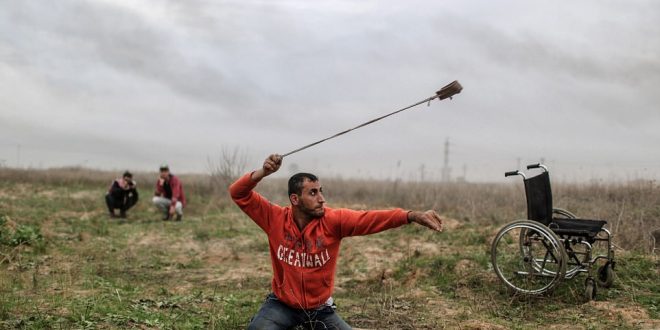 IMPERIALISM AND ZIONISM WILL BE DEFEATED, THE RESISTING PALESTINIAN PEOPLE WILL WIN!

THE GAZA MARTYRS ARE IMMORTAL!

14 May was the 70th anniversary of the founding of Israel, and at the same time Nakba Day, meaning “Great Disaster” for the Palestinian people. In addition, the imperialist USA fixed on May 14, as the day when its embassy was to be moved from Tel Aviv to Jerusalem.

When the imperialist and Zionist killers declared that “Jerusalem is the capital of Israel” there was bound to be a response from the Palestinian people and there was. From 7 to 70, from women and children, it came from hundreds of thousands of Palestinians; they participated in the “Great March For The Return ” to protest this move and the Nakba and to defend their occupied homeland at the cost of their lives.

The answer of the killers was a massacre. At least 66 Palestinians were killed and more than 3,000 were injured, as the Israeli snipers opened fire with live ammunition and dropped gas canisters from the air using drones.

After the massacre, US and Israeli officials made statements with the saliva drooling from their mouths. After the massacre, the ruling Likud Party’s deputy Avi Dichter said, “Israel has all the bullets it needs for everyone, the army has made all preparations”, while US President Trump congratulated Israel on the opening of the embassy, saying it was “a great day for Israel”, even as the massacres were happening.

On May 14, when one of the greatest massacres of Palestinian history took place, the Palestinian people once again showed to the peoples of the world what patriotism is and what price must be paid to defend their land against the occupation.

We will undoubtedly remember this massacre and resistance in the person of Fadi Abu Salah, who was 29 years old. In 2008, Salah lost his legs in Israeli air strikes. Yet he joined the protest with his wheelchair in Gaza, challenged the enemy by getting to the Gaza fence, showing unlimited and imperishable anger in his eyes. The killers martyred Fadi Abu Salah just as they have done to tens of thousands of Palestinians up to the present time.

History bears witness; new Fadi Abu Salahs will be born as long as there is a struggle between the just and the unjust. The Palestinian resistance turned Fatma An-Najar into a fighter – she had 30 grandchildren and was 65 years of age; will continue to create the most glorious examples of patriotism with new Fadi Abu Salahs, continue to demand an account from imperialism and Zionism, and sooner or later liberate the Occupied Territories. Here it is: the Palestinian people who created their own heroes without surrendering to their own circumstances will be invincible against all the massacres of the imperialist USA and collaborator Zionist Israel. The way of liberation for the peoples of the world is to be “Fadi Abu Salah” against imperialism and its collaborators.

As the Anti-Imperialist Front, we condemn the US embassy in Jerusalem and the massacre by Israel, and we salute the dignified resistance of the Palestinian people.

Killer USA, Collaborator Israel, Get Out Of Palestine!

Fadi Abu Salah And The Gaza Martyrs Are Immortal!