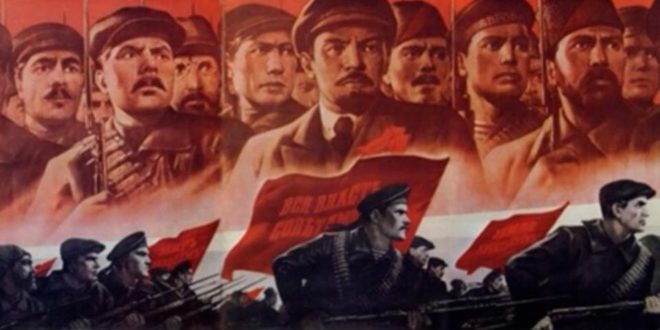 We salute the Soviet peoples for their glorious victories and resistance!

100 years ago to today… The bourgeoisie lost, the proletarians of Russia presented a great victory to all peoples as a present!

The peoples living under the tyranny and oppression of Russian Tsarism, the peoples of the Caucasus and Central Asia, rebelled under the leadership of Lenin, destroying Russian Tsarism… And the socialism they won lasted for 70 years, supplying the peoples with their most valuable experience.

We greet the Soviet leaders, the fighters and insurgent peoples, who carried out the Soviet revolution and then sent Hitler fascism to the dustbin of history …

The October Revolution is the first and foremost victory of the working class all over the world! This victory was won by the guidance of Marxism and led by Lenin, with the self-sacrifice of the Russian workers! The Soviet revolution is still leading us today. Victory has been won after hundreds of years of struggle! The star of socialism gliitered even in Siberian exile, the executions and captivity under onerous conditions! The revolution was not achieved in a night, it was won by the relentless ideological struggle against the Mensheviks, by concentrating the anger of the workers who worked in the factories, the fields, sometimes dying with their machinery, in conditions of slavery!

History has also shown us, no victory is easy… From the Paris Commune to the present day the bourgeoisie has tried every possible way to destroy us. Today the same attacks continue on every front. While saluting the Soviet proletarians, we repeat our watchword, “We will shake the world once again from Turkey”.

Because, as the peoples of Turkey, we live with the honour of resisting fascism, not bowing down, and with our hunger! With the hunger of Nuriye and Semih, the resistance of Free Prisoners, who are attacked almost daily but never bowed down, also sends a salute to the October Revolution!

We sit in the halls of the October Revolution but will not speak! We are on the road paved by the experts…

We are in Yuksel Avenue every day, to break the blockade!

We are with Nuriye every night and day, so that the executioners cannot touch her!

We resist every day in the prisons! Even if our arms are broken, we ALWAYS STAND UP!

We are in Dersim with the resistance of Kemal Baba who got back the remains of 11 guerrillas after 90 days of hunger strike!

We work day by day at the lathe in workshops, in fields, in factories, in textile workshops!

We are in the universities, hospitals and schools … WE ARE EVERYWHERE!

We are wherever there is labour!

We invite everybody who wants to celebrate the October Revolution to the arenas of resistance! We greet the people of the Soviet revolution with the calloused hands of the workers, not on the hotel rostrums, but on the wooden benches of factories! The revolution in Turkey will certainly come from the hands of the labourers, the workers in the poor neighbourhoods!

That is why we call everybody who wants to salute the revolution and share this glorious victory to Yuksel Avenue and Numune Hospital! We invite you to meet Mehmet Guvel, Feridun Osmanagaoglu and Semih and Esra Ozakca!

Imperialism will be defeated, the peoples that resist will win!

We greet the glorious victory and resistance of the Soviet peoples!