BIGtheme.net http://bigtheme.net/ecommerce/opencart OpenCart Templates
Home » MANŞET » Nuriye and Semih Will Live On Within The Struggle Of The Peoples! 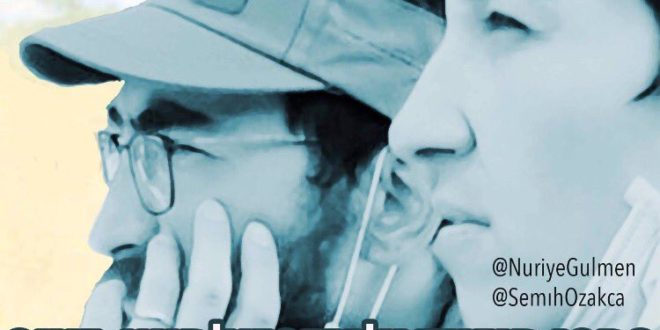 Nuriye and Semih Will Live On Within The Struggle Of The Peoples! 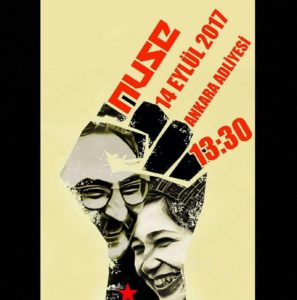 On September 14, a theatrical performance took place in the capital of Turkey, Ankara. There was a court performed on stage … There were only lies on this stage, there was fascism; the prosecutor is kitted out with a sword, the judge is wearing his robe, they are trying to make the people surrender by putting resisters on trial. But it did not succeed, Nuriye and Semih are inside, but the people are out there all day …

In the courts, in the squares … NURIYE and SEMIH are everywhere!

From 5:00 am on the morning of the court, the police began street-by-street occupation of Ankara. They followed groups of more than two people who walked alongside one another. Thousands of police closed down even the smallest streets, vehicles coming to Ankara were individually inspected. However, despite all the obstacles, hundreds of people came to the courthouse and continued to chant “Nuriye and Semih”.

Lawyers in front of the courthouse issued a press statement, while those who were there in solidarity with Nuriye and Semih gathered on the steps in front of the court. The cops began harassing people even before the press statement. But they did not succeed. CHD (Contemporary Lawyers’ Association) lawyers issued their statements first, and at the end of the full statement the police of AKP fascism attacked with plastic bullets, batons, shields and gas the people participating and present at the reading of the press statement. Against those who tried to ban even mentioning the names of Nuriye and Semih, the people, with their loudest voice, screamed their names in the cops’ faces. While the court was still in progress, the people continued to support Nuriye and Semih with all their might. Nearly 50 people were taken into custody while the busiest streets of Ankara were closed down. One person suffered head trauma from these attacks, and is still being treated in hospital.

The defence was also under pressure in this theatre performance. The 16 lawyers who were preparing for the defence, who were working for the defence, were taken into custody two days before the court with raids on the People’s Law Bureau and their houses. They wanted Nuriye and Semih to be left defenceless, but 1,030 lawyers came and showed solidarity with their colleagues and the honour of their profession, they would not leave Nuriye and Semih without a lawyer and filled the hall, showing their authorisation certificates.

The Anti-Imperialist Front (AEC) was also in the court, attending with a delegation of nine participants and translators from five countries. Nuriye and Semih give hope to the peoples of the world, with resistance and the call to fight. And we, as the Anti-Imperialist Front, took part in the court to show that we were in the struggle, whether we were near or far away. The presence of a foreign delegation for the first time in the cases in Ankara was due to the lawyers’ insistence and the AEC’s determination not to leave until the decision was announced.

The accused, Nuriye Gulmen and Semih Ozakca, a teacher, who had been fired from their jobs, were not brought into the court. The excuse was fear of an escape. Obviously, those who prepared the theatrical script were also lacking in reason and logic, fascism was unreasonable, and the decision was a reckless one.

The fear of AKP fascism in laying siege to Ankara was of course not due to the possibility of escape, but of the people seeing the steady and upright stance of those who resist. The only reason for this theatrical performance was to prevent two resisters from appearing before the people. What they had representing justice were fascist representatives against the people, and they used all means to maintain their court in the unauthorised and lawless form they desired.

The court session began with the argument that the lawyers coming to support them should not be admitted to the court. The judge took a step back and the lawyers were allowed inside.

The defence, given the first word, was made by the lawyer Acun Karadag who said the lawyers were taken into custody two days ago and that the right to a defence was taken away, that they would not accept this suppression, and to protest the situation would not make a defence.

Then the CHD Ankara branch chairman made a defence. In the defence it was noted that the attack in front of the courthouse and the detention of 16 lawyers of Nuriye and Semih were denials of a right to a defence. Then Betul Vangolu Kozaagacli made a defence on behalf of the People’s Law Bureau. She noted that it was unacceptable for the lawyers who had prepared the case file to be detained two days before the hearing, and they would continue to resist the denial of a right to a defence.

It was also noted in connection with the file that Nuriye and Semih were on hunger strike for the sake of their morality and the right to a human way of life, and their hunger was the most legitimate resistance and a reaction that was justified.

Then the presidents of the bar associations of Ankara, Van and Sakarya took the floor. In general, they described the failure to bring Nuriye and Semih before a court and the attack on their right to a defence through the detention of their lawyers, and said that these two educational workers gave hope to the people and called for them to be released and allowed to return to work.

At the end of the defence by all the lawyers, a decision was reached.

And at the end of all this theatre, the judge’s decision did not surprise anyone.

The judge’s delegation decided that under the state of emergency in the face of solidarity from lawyers, the number of permitted lawyers would be limited to three, and because of the solidarity from the people the next court hearing would be held on the grounds of Sincan Prison, and their detention would continue until September 28.

Let’s Be In Sincan On September 28, Let’s Put Fascism In The Dock!

We know this inheritance for the defence in the history of the Bulgarian revolutionary Georgi Dimitrov, and how he sat in judgment of German fascism, and through the picture of the Greek Communist Nikos Beloyannis, with carnations and his eyes glowing with determination.

We know from the Algerian Cemile Bouhired, who continued the war against the French colonists in the court, and clenched a fist as a gesture of defiance to the French colonialist torturers, and from the historic photograph of Dursun Karatas in front of the judges at the Devrimci Sol (Revolutionary Left) Main Trial.

We call all the world’s peoples, all the revolutionary patriotic organisations, to support those who render judgment against the courts of fascism…

Let us join the court in yet greater numbers in the prison complex where Nuriye and Semih are held, let us judge fascism once more, let us give strength to those resist and let us give breath to those who fight for justice… Let us not allow fascism to slaughter our comrades!