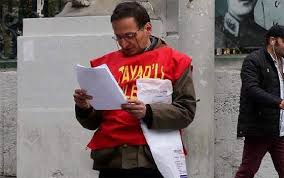 Inanc Ozkeskin Is Immortal! The murderous AKP police have murdered a member of TAYAD!

In the early hours of June 13, the murderous AKP police raided a house in Kadikoy and murdered Inanc Ozkeskin, one of our TAYAD family. Hours later the bourgeois media presented it to the people as “a terrorist preparing an attack on the minister Suleyman Soylu has been rendered harmless”.

Once again the AKP is lying… Inanc Ozkeskin is the brother of Ilginc Ozkeskin, one of the martyrs of the 1996 Death Fast, and he has continued the TAYAD tradition of being the voice of their sons and daughters. They want to legitimise a murder by using a lie about an attack on Suleyman Soylu being prepared. The result of the AKP’s helplessness against resistance is that it was presented as a big operation and a suspect being caught!

The murderous police of the AKP kill people who join in democratic actions, anyone who opposes them, and there is no legal basis for it at all! Just like Dilek Dogan being killed when her mother was in the house, or Yilmaz Ozturk on the way to his home, now Inanc Ozkeskin has been murdered in his own home.

These murders are AKP fascism…

The AKP gives kill orders to the police whoever the target is and then they take a life.

As the AKP’s crisis of rule continues, it tries to use lies like today in order to continue to rule through fear and massacres. But this people will always raise new sons and daughters to oppose the repression.

Ignoble Suleyman (translator’s note: play on his name – soylu in Turkish means “noble”), is not the first and will not be the last. But this people will never forgive them for their massacres. Inanc Ozkeskin knew that his brother sacrificed himself for the people and took his place in the struggle of TAYAD for rights and freedoms. The essential reason why he was murdered was because he was shoulder to shoulder with those who resist fascism… If they want to rule the people with fear, they will not be able to stand up to the power and the belief of the people!

Their executions cannot stop us resisting and struggling against fascism.

We will demand a reckoning for those who murder the sons and daughters of the people!