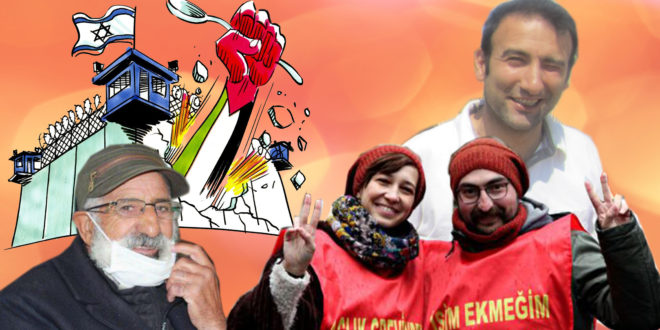 Umit Ilter
The hunger of the people is where where the imperialist attacks are used up…
Imperialism, together with its collaborators, attacks the peoples of the world with the weapon of hunger, attacking with tanks, guns and collaborationist gangs …
However, in the face of the resistance of the people, not only the tanks and guns but also the weapon of hunger is helpless.
Because today, the weapon of hunger is in the hands of the peoples, the peoples all over the world resist with their hunger and victory comes after months of hunger.
Palestinian resistance to all kinds of oppression and tyranny in Israeli prisons, with 1,700 prisoners on hunger strike, was a hunger shared with all Palestinian people. And the hunger brought victory, Zionist Israel bowed to their hunger … The hunger of the Palestinian people was a weapon against oppression in this resistance.
In order to get back the charred remains of DHKC guerrillas in Turkey, Kemal Gun went on hunger strike for 90 days to demand their remains. A 70-year-old man won by going on hunger strike for sons and daughters burned and killed in the mountains of Dersim. Our victory was our oath to demand a reckoning.
Both in Israel and Turkey we won with our hunger, but it is not finished, our hunger is great, even very great… Our hunger is powerful enough to destroy the borders drawn and walls built by imperialism, even with a flick of our fingers…
Yusuf Tas, a revolutionary prisoner against German imperialism, is resisting using the weapon of hunger. Yusuf Tas is in Heimsheim Prison in Germany, and has been on hunger strike for over 60 days over the refusal to supply Turkish-language letters and publications and over isolation practices. Hunger to greet his comrades and people, and to break down the wall of racism in the German prisons … We know and believe that imperialism in Germany will give in, in the face of his hunger, our greetings in Turkish and our revolutionary anthems …
In the heart of the oligarchy in Turkey, our hunger which began in Ankara has turned into a resistance fire against the state of emergency all over Turkey… During the state of emergency Nuriye Gulmen and Semih Ozakca were fired as a result of a government decision and all their rights were taken away. AKP fascism scorned even a mouthful of bread for them and they are resisting with hunger for the sake of tomorrow. On Yuksel Avenue, Nuriye Gulmen’s solitary resistance after 200 days became a place where people challenged the state of emergency… We were one and then became hundreds of thousands … The AKP arrested Nuriye Gulmen and Semih Ozakca on the 75th day of a hunger strike in the face of resistance to fascism beginning to take on a mass character, closed the Yuksel Avenue to the public, closed off the Human Rights Statue with barriers, and trampled underfoot our flowers which are the symbol of spring…
While Nuriye and Semih are inside, we continue to resist outside.
We have learned from Bobby Sands, our 122 Death Fast martyrs, our father Kemal and the people of Palestine…
The weapon of hunger directed at imperialism is the victory of the peoples.
And today we call on all the peoples of the World to support ongoing hunger strike resistance…
Every letter we write to Yusuf Tas, Nuriye Gulmen and Semih Ozakca, every day and every hour we share our hunger for them will bring victory closer.
We are right, we will win! – Dursun Karatas
Tiocfaidh ar la (Our day will come)! – Bobby Sands
“The hunger strikes are the front line with the enemy and our empty stomachs by themselves constitute a front” Leila Khaled
For all peoples, the language of hunger and resistance is the same!
Greetings to those who hunger and war on imperialism with their bodies …
Yusuf Tas’s Demands Must Be Accepted!
Nuriye Gulmen And Semih Ozakca Must Be Allowed To Return To Work!
WE WILL NOT BE VICTIMS OF IMPERIALISM BUT ITS EXECUTIONERS!
IMPERIALISM WILL BE DEFEATED, THE PEOPLES THAT RESIST WILL WIN!
For letters:
Yusuf Tas:
JVA Heimsheim
Mittelberg 1
71286 Heimsheim (Germany)
Nuriye Gulmen:
Sincan Kadın Kapalı Hapishanesi (Sincan Women’s Closed Prison)
Ankara – Turkiye (Turkey)
Semih Ozakca
Sincan 1 No’lu F Tipi Hapishanesi  (Sincan No.1 F-Type Prison)
Ankara – Turkiye (Turkey)
For protests:
Heimsheim Prison
Mittelberg 1
71286 Heimsheim, Germany
Tel: 07033/3001-0
Fax: 07033/3001-0
Mail: [email protected]
Turkey– Justice Ministry
06659 KIZILAY / ANKARA
Telephone:
90 (0312) 417 77 70
Fax:
90 (0312) 419 33 70
E-Mail:
[email protected]