BIGtheme.net http://bigtheme.net/ecommerce/opencart OpenCart Templates
Home » MANŞET » After Ankara: Why Erdogan and NATO’s Strategy is in Ruins. by TARIQ ALI 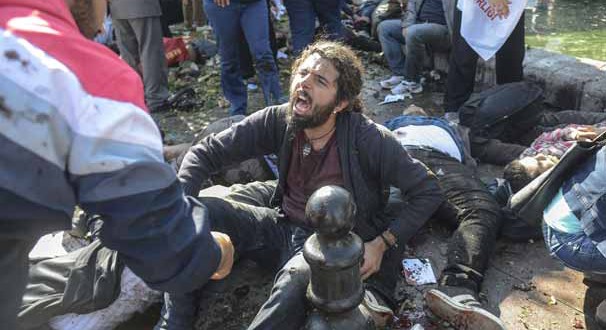 After Ankara: Why Erdogan and NATO’s Strategy is in Ruins. by TARIQ ALI

Onur Erem: Last weekend we experienced the biggest bomb attack on civilians in the recent history of Turkey. Around 100 people died (exact number is unknown) and all of us lost many friends. This attack came after the unsolved bombings of Diyarbakir (just ebfore the election, on a Kurdish gathering) and Suruc (which killed 33 young socialists). The opposition in Turkey have been warning the AKP government about their involvement in Syria and opening the Syrian border to radical Islamists. Now we have ISIS cells in Turkey, which have been attacking in Diyarbakir, Suruc and finally Ankara bombings. What do you think about the role of Erdogan and AKP’s Middle East policy, in the recent terrorization of the streets in Turkey? What is your opinion on the Turkey’s involvement in Syria and its relationship with various jihadist organizations?

Tariq Ali: Erdogan’s–and NATO’s–strategy in the region is now in ruins. Turkey (leaving aside the Gulf states for the moment) was the principal promoter of ISIS as a new force to bring down Assad. Without this support ISIS could not have proceeded so far, so fast. It’s true the Iraqi army and its corrupt officer caste refused to fight ISIS and fled rapidly. The Syrian Army did fight back as did the Syrian Kurds, but there was a stalemate that was finally broken by Putin’s recent demarche. ISIS, we must never forget, is NOT simply a stooge army of Riyadh or Ankara. It shares some aims with both, but its proclaimed goal of a Sunni Caliphate is not favored by any state in the region. Who is using who? Both are using each other In return for Erdogan’s support, the jihadis seem to be ‘helping’ him by killing AKP’s opponents. The extent to which the AKP’s ‘secret state’ collaborates with ISIS is a question I could not answer. There is no evidence so far but it wouldn’t surprise me if this turned out the case.

QUESTION: President Erdogan, Prime Minister Davutoglu and many AKP Parliament Members have been telling that in Turkish population choose chaos instead of AKP single party government, so the massacres that we’re experiencing is a result of not voting for AKP. What do you think about this logic? How can a democratically elected government threat its own population by saying “if you don’t elect us, there will be chaos”?

TA: It’s no big secret that Erdogan was shaken by the AKP’s failure to win an overall majority and the HDP’s sensational entry into parliament. A rational bourgeois leader would have been pleased that the PKK were prposing a truce and were prepared to work inside existing parliamentary institutions [like the IRA and ETA before them]. Instead Erdogan took this as a threat to his prestige, a challenge to his power and began to behave like a tin-pot dictator, a process that had begun after the huge protests all over the country following the assault on Gezi. That in itself highlighted the rifts inside the AKP and its dependence on the building industry. If your own face is pockmarked with corruption, why blame the mirror? In fact, it is the AKP’s arrogance and adventurism that has destabilised the country.

QUESTION: AKP government passed a “security bill” this spring which allowed them to arrest left wing or Kurdish people who attend demonstrations for “reasonable suspicion”, which was a definition heavily criticized for its vaugeness. However
extremecentreyesterday Prime Minister Davutoglu said: “We are a state of law. Although we have the names of the potential suicide bombers of ISIS, we can’t arrest them before they take action”. This was a shocking declaration for us. Another shocking declaration came from Interior Minister Altinok, as he said “No security lapse contributed to the Ankara bombing”. Human Rights Watch’s Turkey Researcher Emma Sinclair-Webb reasonably asked “What does that mean? Things went as planned? By whom?”, but she couldn’t get any reply. What is your comment on these declarations?

TA: The lack of concern for the lives of its own citizens by an elected government is not new but is shocking nonetheless. They know who the suicide bombers are but there is no evidence (i.e., they haven’t yet committed suicide and killed innocents) and taking them into custody would have been premature. This is such incoherent rubbish that I’m amazed these two jokers are still in the government or is this Erdogan’s position as well? If this is the case, a cover-up is taking place.

QUESTION: When you were interviewed by BBC two years ago, about the debate that Turkey could become a country like Pakistan as Syria turns into Afghanistan, you said that the main difference between the two countries is that there are not many Turkish members in ISIS. Two years passed and today there are many Turkish ISIS members. Dozens of them were arrested two months ago, but released in a few days. Prime Minister Davutoglu announced that they have a list of Turkish ISIS suicide bombers, which is around 20 people. ISIS is making Turkish broadcasts, publishing in Turkish journals and organizing in the country. So what do you think about the same debate today?

TA: I underestimated the ISIS presence in Turkey and their appeal to former Erdogan supporters who have become disillusioned and moved in the direction of jihadi fundamentalism. So Turkey is not immune to the virus. Clearly official support for and tolerance of ISIS made it easy for them, but they cannot be defeated exclusively by force. Turkey needs a popular government that breaks with neo-liberal economics and NATO-encouraged interventions.

QUESTION: Turkish government has been threatening Russia by shooting at their planes if the approach the Turkish air space. But after 2 breaches, we have seen that these threats are not working. The West has also been accusing Russia for its recent bombings in Syria. How will the Russian involvement in Syria affect Turkey?

TA: If the Russian succeed in their aim, which is the military destruction of ISIS in Syria and the preservation of the regime with or without Assad, it will be a political defeat for Turkey, Saudi Arabia and NATO with repercussions for the whole region. But that’s a big IF.

This interview was conducted by Onur Erem for BirGun newspaper.

Tariq Ali is the author of The Obama Syndrome (Verso).

Who is TARIQ ALI?

Tariq Ali (/ˈtɑːrɪk ˈɑːli/; Punjabi, Urdu: طارق علی‎; born 21 October 1943) is a British Pakistani writer, journalist, and filmmaker.[1][2] He is a member of the editorial committee of the New Left Review and Sin Permiso, and contributes to The Guardian, CounterPunch, and the London Review of Books.