BIGtheme.net http://bigtheme.net/ecommerce/opencart OpenCart Templates
Home » People's Front » News » “We have said we will the body, and we have got it” Police Attacked People Law Office Press Conference 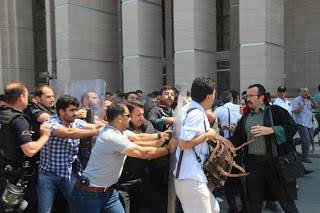 “We have said we will the body, and we have got it” Police Attacked People Law Office Press Conference

In the days of arguments about the body of Günay Özarslan, female Kurdish revolutionary who had been executed in a family house in
Istanbul by the police during nationwide raids, the Alevi Center
(CEMEVI) in Gazi district was constantly attacked with gas bombs.

population had undertaken to bury the body of Günay Özarslan–which was
held in Cemevi for two days–according to her wish, showed to the
people the true face of fascism.

Alevi associations and also the Association of Progressive Lawyers (CHD)
gave their opinion on the incidents.

On the morning of July 27th the Alevi association “Alevi Bektasi
Federation”, “Anatolian Culture Foundation Haci Bektasi Veli”, the
“Cultural Association of Pir Sultan Abdal” and the Alevi Cultural
Association “Hubyar Sultan” declared in front of the Istanbul
Governorship, that they tried to contact the responsible authorities in
relation to the attacks which turned out into an “exercise for massacre”.

The deputies of the Republican People’s Party (CHP) Aykut Erdogdu and
Hilmi Yarayıcı and also the representative of HDP Ali Kenanoglu
attended the press conference, when finally a delegation was formed for
an interview with the governor.

On the same day, the attorneys of CHD had gathered in front of the
Caglayan Court to file charges against the police attacks. But they were
not spared the attacks by the “security” forces. The lawyers said, that
they were forced by the police with shields and even that their
colleague Ebru Timtik’s bag was stolen by an official.

The lawyers reported about the way in which their client Günay Özarslan was murdered, and stressed that the so-called “operations against the IS” with methods of the state of emergency was directed against the revolutionary left and socialist parties.

After the lawyers reaffirmed again that there was no confrontation with
Günay Özarslan, but this was a real execution that the evidence was
obscured in place of the crime and the floors were cleaned up
immediately, the victim’s mother, Makbule Özarslan also said a few words.

She reported, that with her daughter and their comrades they were
“soaked in gas for 5 days”, that the “water cannons had skin burning
chemicals added” and that “many young people were injured in the attacks”.

She also said, that they, because of the attacks directed against them
could not even live the pain. “My heart is turned to stone. It is not
enough that they murdered my daughter but they even try to prevent that
we bury her.”