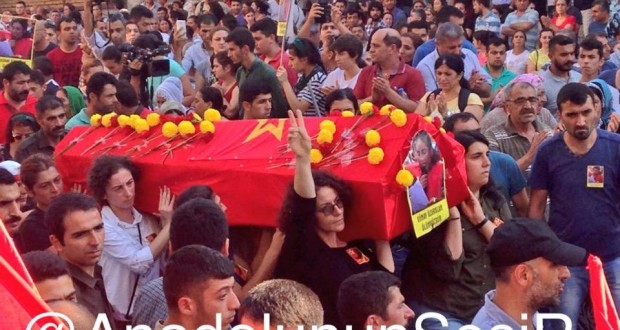 Aycan Çiçek:one of the lawyers of Halkın Hukuk Bürosu (Law Office of the People)

After Suruç Massacre, as a part of the so called ISIS operation launched by the state on 24th of July, mostly socialists, leftist dissidents are detained. During the operation 1050 people were taken into custody of which only 22 were charged of being related to ISIS. While Turkish State uses ISIS as an excuse to legitimize its war strategy internationally; inside the country, it uses terror threat card to target leftist organizations and the Kurdish movement. Within the scope of this operation one of the places the police has raided was Günay Özarslan’s house.
Photo of Günay Özarslan
Police stated that Günay Özarslan was shot as result of a clash, however in a press statement issued for TAYAD (Solidarity Association For Families of Prisoners) : Aycan Çiçek said that 15 bullets were found in Özarslan’s body, despite the fact that there were no signs of a clash taking place in her house. Çicek also remarked that the delivery of her body to the family and the transmission of the funeral to Gazi had been precluded by the security forces.

After Özarslan’s autopsy, an application for the delivery of the funeral to the family was made. Lawyer Yılmaz said:

We didn’t get any information from the police indicating Özarslan was armed. We could only discern the bullets belonging to the police.

According to the eyewitnesses, police knocked on the door, while another person in the house was preparing to open the door, Özarslan went out to the balcony to shout out slogans. At that moment, police busted inside and shot Özarslan.

Özarslan’s funeral was taken to Gazi Cemevi (place of worship for Alevis) 2 days after the incident. Meanwhile, Governor of İstanbul stated that they would not allow illegal organizations to use funerals as a platform for propaganda. Following this statement the funeral was hindered and Gazi Cemevi was blockaded. People of Gazi started resisting in order to bury their comrade the way they wanted. Polis fired gas canisters almost everywhere including homes and the Gazi Cemevi and attacked people with plastic bullets. During the clashes, police special operations team was also dispatched to the district. During the clashes that lasted for 2 days, one police was killed and 2 people were injured.
Barricades in Gazi, protests for Günay Özarslan Photo: Hayri Tunç

İstanbul Deputy of the HDP Ali Kenanoğlu infromed that the police had ceased their assault at about 2.00 AM on the 26th of July; but that afterwards, they had resumed attacking the Cemevi and its surroundings again in the morning.

Governorship finally stepped down and let the body be inhumed. The funeral was planned to take place at 4.00 PM and Günay Özarslan was finally burried after 80 hours of struggle against a police force that numbered in the thousands, with tens of TOMAs (Armored water cannon vehicles), and thousands of gas canisters and plastic bullets were used.